Draycott and Wensum top the pile as JBL returns 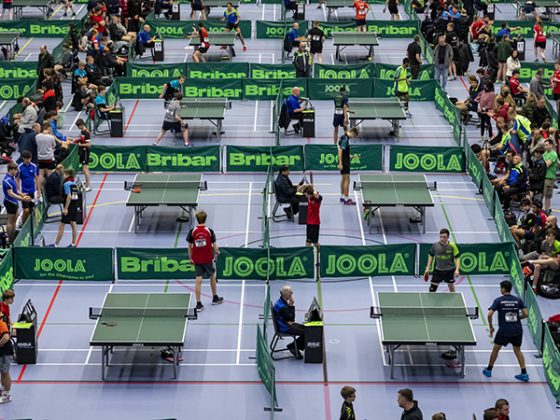 Draycott and Wensum lead the respective boys’ and girls’ Premier Divisions after the first weekend of Junior British League action at Derby Arena.

A total of 80 teams were in action across 13 divisions, looking to build an advantage over their rivals ahead of the decisive second weekend in February.

Watch highlights from the competition below:

Pictures by Chris Rayner – more will appear on our Flickr page in due course.

Draycott remained unbeaten throughout the weekend in the boys’ Premier Division and they head Ormesby and Archway Peterborough by three points, having beaten both their nearest opponents 4-2.

The leaders ended their weekend with that 4-2 win over Ormesby, notable for a marathon first game as Josh Weatherby beat Green 21-19 to set up a 3-1 victory.

Draycott were also helped by their two nearest rivals themselves fighting out a 3-3 draw in found four, Weatherby delivering a point for Ormesby by defeating Jakub Piwowar in the final match.

Camara was the outstanding player in the division, winning all 10 of his matches, and though his Fusion team lost only once, three draws meant they finished a point behind Archway and Ormesby.

Wensum had a perfect record in the girls’ Premier Division, dropping only four individual matches across the weekend as they lead Kingfisher by two points.

They only had one perfect 6-0 result, but the others were all 5-1 as no opponents were able to put them under pressure and nearest challengers Kingfisher only prevented a whitewash when Anaya Patel won the final match 11-9 in the fifth against Amy Marriott.

There were no drawn matches in the division and the league table sees two points separating each team as the points column reads 10-8-6-4-2-0.

Average-wise, Wensum’s Mari Baldwin was unbeatable and had a 100% record across her 10 matches, only dropping three games all weekend and no more than one in a single match.

In Division One, Brighton lead the way and are unbeaten, though two of those matches were draws – against nearest challengers Wensum II and also against Draycott II.

Wensum and Ormeau are 1pt and 2pts respectively behind the leaders, having only tasted defeat once each.

Saskia Key of Wensum had a 100% record from eight matches and Brighton duo Jodie Morris and Lauren Loosemore were both on 90% from the full complement of 10 matches.

Division Two of the girls’ competition has clear leaders in the shape of Cippenham, who won all five of their matches to head Ormesby by three points.

Cippenham’s charge to the top was underpinned by Hannah Silcock, who won all 10 of her matches to lead the averages ahead of Ormesby’s Ella Pashley (9/10).

The picture is the same in Division Three, where Woodford Wells won all five and lead Draycott IV by three points.

That result put Watkinson on track for a 90% average from her 10 matches, a feat shared by Woodford’s Mabel Shute.

In the boys’ competition, Division One sees unbeaten Ormeau lead the way on 9pts, one ahead of Ackworth eBaTT. The teams met in the first round of the weekend and drew 3-3. Ormeau recovered from losing the first match to Felix Thomis, to come back and lead 3-1 thanks to a James Skelton double.

Ackworth also remained undefeated over the weekend, but were also held to a draw by third-placed South Croydon, for whom Olly Maric-Murray bagged a double, including the crucial 3-0 win over Tham in the final match.

Three players in the division enjoyed 90% records – Mooney and James Skelton of Ormeau and James Hamblett of fourth-placed Urban.

Division Two is also headed by an Irish team, with Mid-Ulster on 9pts, one ahead of Greenhouse.

The top two met in the first round, and it finished 4-2 to Ulster, despite a double for Greenhouse’s Krish Chotai.

Chotai led the averages with a perfect 10 out of 10, while Trumpauskas was also on 100% from eight matches.

Grantham College III lead Division Three by a point over Greenhouse II. Grantham remained unbeaten and their only dropped point was thanks to a 3-3 draw against their closest rivals, earned by Joseph Dennison in the final match, beating Adedapo Onakomaya in three – the only tie of the match which did not go to five.

Dennison had a 100% record across the weekend from his 10 matches, while his team-mate Lewis Marsh won nine out of 10.

Greenhouse were unbeaten as well, but also picked up a draw against third-places Nailsworth Phoenix in the first round.

Britannia and Fusion III share the lead in Division Four on 8pts, one ahead of Brighton.

Britannia defeated Fusion 4-2 in the first round of matches, while Fusion beat Brighton by the same score in the third round and Brighton then overcame Britannia in the final found – again, it was a 4-2 margin.

Brighton’s 3-3 draw against Grantham IV sees them a point behind the leading pair, but they had the leading player in the averages – of those who played a full set of matches – in the shape of Owen Brown, who won 9/10.

Greenhouse III won all five matches to hold a healthy 3pt lead over Bribar Cleeve Park in Division Five, though they had to work for it, winning four of their five matches 4-2.

Top of the averages was Jesse Bath of Fusion IV, who won all eight of this matches – though Fusion were unable to register a win, drawing three and losing two to stand in fourth place.

There are two unbeaten teams in Division Six – leaders Dundee & District on 9pts and third-placed Sophia Gardens, who won two and drew three.

They are split by Mid-Ulster II, who won three and drew one, losing only to the leaders, by a 5-1 margin. Dundee’s only dropped point was, obviously, against Sophia Gardens – and Dundee had to come from 3-1 down to earn a point finally clinched by Jacob Munro in five against Evan O’Connor.

Sophia’s Harri Docherty enjoyed a 100% record from his 10 matches to top the averages, ahead of David Hay of Dundee (9/10).

Division Seven is a tight one, with Kingfisher and Loop Dublin leading the way with four wins and a defeat apiece, one point ahead of Woodford Wells, who won three and drew one.

They all took points off each other – Woodford beating Dublin, Dublin defeating Kingfisher and Kingfisher overcoming Woodford, who also drew against Chelmsford-Colchester.

Harry Randall of Kingfisher was the leading player with a perfect 10 out of 10.

In the eight-team Division Eight, Draycott III lead the way with a perfect record of five victories, giving them a two-point advantage over Ellenborough and BATTS II.

Draycott defeated BATTS 6-0 but are yet to play Ellenborough, who themselves lost 4-2 to BATTS.

Fred Jones had a 100% record for the leaders, from eight matches, while Kacper Piwowar won nine out of 10 for Torbay, who sit fourth with three victories and two defeats.