Tom Jarvis & Charlotte Bardsley staged a brilliant fightback to go through to the last 16 of the Commonwealth Games Mixed Doubles. Liam Pitchford & Tin-Tin Ho are also through, but there was agony for Sam Walker & Maria Tsaptsinos, who went out in a deciding game earlier in the day. 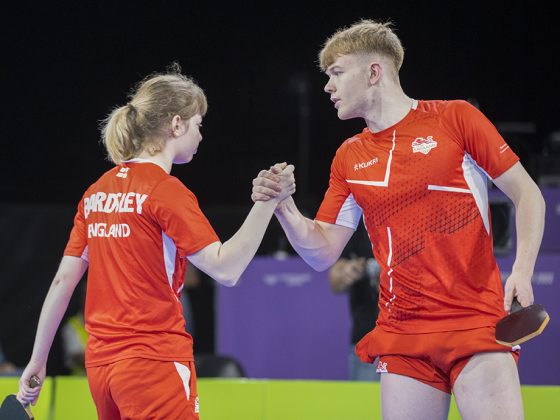 Tom Jarvis & Charlotte Bardsley staged a brilliant fightback to go through to the last 16 of the Commonwealth Games Mixed Doubles by defeating the second seeds.

Liam Pitchford & Tin-Tin Ho are also through, but there was agony for Sam Walker & Maria Tsaptsinos, who went out in a deciding game earlier in the day.

Both English pairs in the last 32 were up against opponents from Singapore and both won 3-2, though the matches took very different trajectories.

Jarvis & Bardsley found themselves 2-0 down to second seeds Pang Yew En Koen & Wong Xin Ru, although they had not done a massive amount wrong.

The spirit in their partnership showed through, as it did through the rest of the squad either supporting in the stands or, in the case of Pitchford and Ho, loitering by the side of their court to add their encouragement after finishing their own match while Jarvis & Bardsley had a few points still to win.

Jarvis said: “I didn’t see that one coming. We were playing the number two seeds, we were down 2-0 and we just got stuck in.

“It was a tough environment for them to play in obviously, the fans were amazing for us and I imagine that’s quite daunting for them hearing it at the end of every point.

“Me and Charlotte really upped our game and I probably played the best three sets of my life in doubles. It’s good going into tomorrow and hopefully we can have more of the same.”

PItchford & Ho, looking to go one better than the silver medals they have won at the last two editions of the Games, by contrast were 2-0 up against Izaac Quek & Jingyi Zhou and seemingly going through at a canter.

Their opponents hit back to take the third and then, from a position of 7-4 ahead, England lost the fourth 11-7.

Walker & Tsaptsinos had a difficult-looking tie on paper in the last 64, against Callum Evans & Charlotte Carey of Wales, and so it proved.

The English pair had leads in both the first two games, seeing the Welsh go on a run of seven successive points to take the first 11-7, and then missing a game point as Evans & Carey won the second 12-10.

England hit back 11-4 in the third, but again had problems in the fourth, seeing a 10-7 lead evaporate and eventually taking their fifth game point, 13-11.

But any hopes of a complete turnaround were swiftly dispelled as the Welsh pair won the first six points of the decider. It left Walker & Tsaptsinos with too much to do and they eventually lost 11-4.

At the same stage, Jarvis & Bardsley were up against Geoffrey Loi & Tammi Agari of Papua New Guinea and their opponents put up a creditable show without truly worrying the English pair.