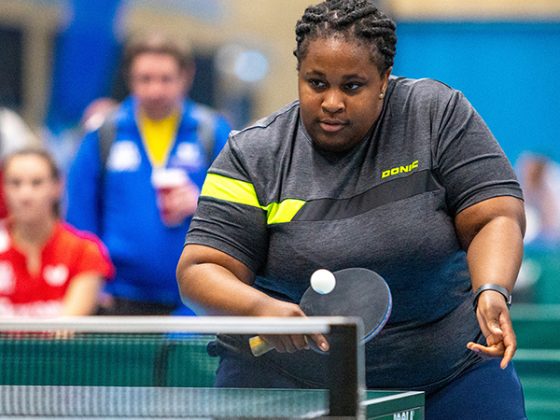 Fusion hold a slender one-point lead at the top of the Women’s British League, Premier Division after they edged out defending champions Joola Plymouth in the final round of matches on weekend one.

Plymouth went into the tie with a one-point lead of their own at the top – Fusion having drawn their opening match of the weekend against Drumchapel Glasgow, and it was all to play for when the meeting was poised at 2-2, Lois Peake having won her two matches for the champions.

That helped to ensure Fusion remained unbeaten all weekend, topping the standings with 9 points, one ahead of Plymouth, with Drumchapel – who lost 4-2 to Plymouth – a further point back.

Peake and Engelson both ended the weekend with 100% records from eight matches each – Engelson also won her two matches in Fusion’s second team in the weekend’s first round of fixtures, before stepping up.

Division One is tight, with the top four separated by only three points and joint, unbeaten leaders in the shape of Joola Plymouth II and Draycott II.

Draycott’s first string are third in the table on 6pts, with Halton II another point back having enjoyed a somewhat better weekend than their club’s top team, who picked up just a solitary victory.

In fact, both second teams overcame their more senior colleagues in the first round of matches on Saturday – it was 5-1 to Halton II and 4-2 to Draycott II.

The leaders only dropped four individual matches all weekend, two of them against Dun Laoire Ladies – though Fusion were never in danger of dropping points as they led that fixture 4-1.

Fulham started the weekend brightly with three wins on Saturday, but a 5-1 defeat to Fusion and a 3-3 draw with Brighton leaves them trailing the leaders by three points.

There are joint leaders of the eight-team Division Three, with Drumchapel Glasgow II and Wensum both on 9pts courtesy of four victories and a draw.

Draycott III are two points behind the leading duo having been held to a draw by Halton III and then beaten 4-2 by Wensum in the weekend’s final round of matches.

Ellenborough Ladies lead the way in the eight-team Division Four, having won all five of their matches for the loss of only three individual ties.

However, they have yet to meet second-placed Cippenham B, who are only a point behind. Their dropped point was in the first round, against Drumchapel Glasgow III, where they needed Rachael Iles’ 3-0 (11-3, 11-5, 11-6) victory over Amelia Smorlarek in the final match to secure their point.

There is a three-point gap from the top two to St Neots and Leeds, who are both on 6pts.

In the averages, Marketa Myskova had a perfect 10 for Joola Plymouth II in Division One, with Scarlett Anders (Halton II) also having a 100% record from eight matches. Megan Jones (Draycott II) won nine out of 10.

In Division Two, Weronika Bozek of Fusion II won eight from eight, while in Division Three it was Saskia Key who topped the pile with a full house of 10 out of 10 – Paula Callaghan of Drumchapel Glasgow II also had a 100% record, from eight matches, while Lauren Loosemore of Halton III had 9/10. It was also 9/10 for Rebecca Savage of Leeds in Division Four.