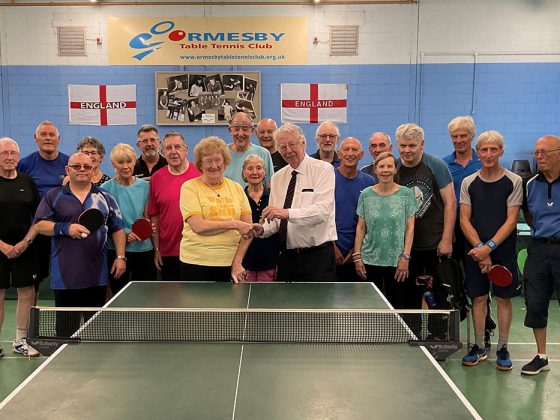 The presentation (see picture above) took place at a recent Ormesby 50+ session. The 50+ is a group that Brenda works particularly closely with.

“Brenda has been awarded the Vice-Presidency of Table Tennis England as a reward for meeting one of the criteria of 20 years of solid work for the sport on a local basis. Brenda’s work for the Ormesby Club goes way beyond 20 years.

“Brenda is one of the main volunteers at the club as Treasurer and she also manages the canteen. The amount of time she spends on table tennis is substantial, which I would calculate at more than 40 hours a week as she attends the club for several hours most days to support most of the sessions and the matches and does a lot of work at home from an admin perspective.

“In addition to this, Brenda is very supportive of the sport in general in this area. She is Secretary to the Middlesbrough & District League and Treasurer of the Cleveland & District Summer League and Brenda sits on our County Association Committee and carries out a lot of work with our tournaments, particularly the Junior 4 Star, and she is Secretary of the North East Regional Committee.

“For the Ormesby Club she also manages the website and deals with all matters relating to the result service required by Table Tennis England for the British League matches etc. She is a highly valued volunteer who is appreciated by all.”