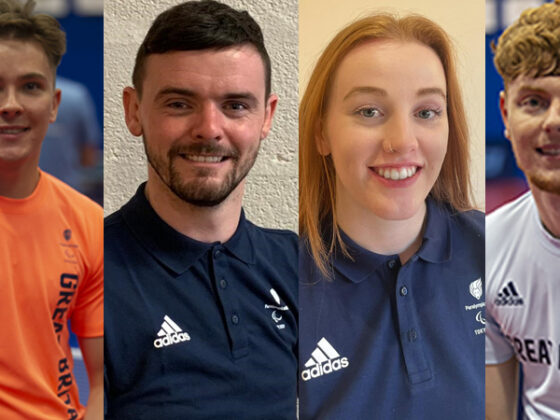 Four Paralympic Games debutants are relishing their first experience on the biggest stage of all as they prepare to enter the arena in Tokyo next week.

English pair Billy Shilton and Megan Shackleton and Welsh duo Joshua Stacey and Tom Matthews are the ‘newbies’ in the ParalympicsGB squad for the Games and all admit they couldn’t be more excited.

Shilton travelled to the last Paralympics in Rio as part of the Paralympic Inspiration Programme, which provides athletes and coaches with several days at a Paralympics to help fuel their development and ambition for future Games.

Now he has graduated to the ranks of those competing for medals and will go for glory in both the Class 8 singles and team events – the latter alongside London and Rio bronze medallists Aaron McKibbin and Ross Wilson.

The Stonehouse athlete said: “Going to Rio as part of the Paralympic Inspiration Programme was brilliant – I think the Paralympics is something that you can only experience if you see it, so it was great to experience the environment and the atmosphere.

“Obviously, it will be a bit different this time but just to see everything and the scale of everything it will really help me in Tokyo for sure. I just want to take every match as it comes – play the best I can and hopefully the results will come.

“Ross and Aaron have nurtured me from quite a young age when I first came to Sheffield (the British Para Table Tennis training base) so it is really nice to be playing team event with them and I’ve learnt a lot from them.

“Everyone on the team gets on so well and that can only be a positive going into the Games, so I’m really excited.”

Shackleton, from Todmorden in Yorkshire, will play in the Women’s Class 4 singles and Women’s Class 4-5 team. In that event, she will partner Sue Bailey MBE, who will be at her sixth Paralympics.

The 22-year-old said: “It means so much to me after years of growing up watching my idols on screen and imagining myself in the team kit, to have actually earned my own kit and to be wearing it soon and representing Great Britain at the pinnacle of my sport.

“My family has seen the work that it has taken behind the scenes, as well as my friends and the rest of the team, and I know that everyone is going to be just as excited for me out there as I am for myself.

“Having gone through qualification for Rio and seen what the guys did in preparation has helped me massively; it was obviously difficult to miss out on qualification last time, but I trusted in the process that for Tokyo it would all work out for me and I feel in good stead.

“I feel that I know what to expect and it is just about getting out there now and hopefully putting in some good performances.”

Stacey, 21, the Commonwealth Games bronze medallist from 2018 in Gold Coast, Australia, will be in the Class 9 singles and Class 9-10 team event, alongside Ashley Facey Thompson.

He said: “I’m really excited; preparation is going really well and I’m looking forward to competing at a Paralympics for the first time.

“It is even better that I’m going as part of a big squad and I’m sure it’s going to be a once in a lifetime experience but hopefully I’ll experience it more than once.

“In the simplest terms it is not so different to a normal competition apart from the fact that it is on the biggest stage, so I’ll just try and simplify the event in my mind and play it like any other tournament.

“The Commonwealth Games was on a smaller scale, but it will give me an insight into the feeling of being around so many other athletes. I’m just prepared for Tokyo to be a fair bit bigger, but I think it will be in my favour that I have experienced something similar.

“Looking back to 2017 when I was first classified, I didn’t think it would be possible to compete in Tokyo so if I had to say one word about how it feels it would be ‘incredible’ because in a very short amount of time I’ve somehow managed it and I’m just glad and very privileged to be in the position I am.”

Matthews has just the one event, in the Class 1 singles, and he says he used missing out on a place at Rio as a motivation.

The 29-year-old Welshman said: “I’m very excited, a little bit nervous but I can’t wait to get out there and experience my first Paralympics and enjoy the experience.

“Missing out on Rio was heart-breaking and Tokyo has been constantly on my mind since then. Training has been going really well; the training camp in Slovenia was really good, getting used to the higher temperatures and using the cooling strategy that I’ve been testing and has worked perfectly so I’m really looking forward to getting out there now and doing my best.

“Obviously, I want to go for a medal – every athlete does – but it’s my first Games so I’ve got to be realistic. I just want to go out there and give my best performance and enjoy the experience.”