Cyprus sunk, now for Singapore in the semis!

England moved smoothly into the men’s team semi-finals at the Commonwealth Games with a largely routine victory over Cyprus today. 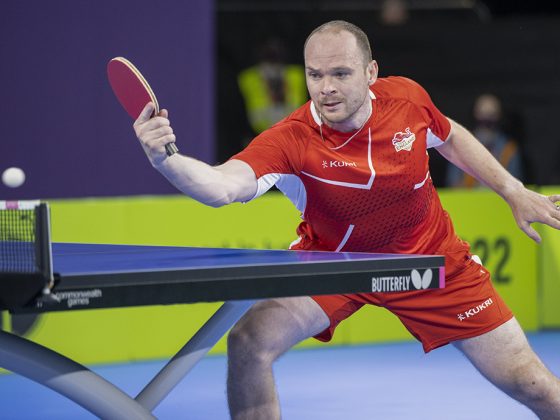 England moved smoothly into the men’s team semi-finals at the Commonwealth Games with a largely routine victory over Cyprus today.

Cyprus had earned their place in the last eight as runners-up in the group won by Nigeria, having beaten Ghana and South Africa.

So, when they carried their confidence forward and Christos Savva & Sharpel Elia started quickly in the doubles, it was little surprise.

England pair Paul Drinkhall & Tom Jarvis did not lead until 7-6 in the opener, and soon found themselves facing two game points at 8-10.

They saved those in the tumult of a standing ovation as Nigeria narrowly defeated Malaysia on the table next door and, as it quietened down in the arena, England quietly killed the game 12-10.

That was comfortably the closest England had come to losing a game so far in this tournament, and it was to remain that way as they romped through the next two for the combined loss of only five points.

Liam Pitchford faced Marios Yiangou, who had extended the men’s top-ranked player Quadri Aruna of Nigeria in the group stage, taking him to a decider.

Could he repeat it against the No 2 player here? Well, he did take the first two points of the match, but Pitchford was very quickly into his work, winning the next seven points and going on to take the game 11-5.

When Pitchford opened a 5-0 lead in the next, Yiangou’s rueful expression suggested he did not really believe he could threaten Pitchford on a consistent basis, a status underlined when Pitchford unleashed a succession of clean winners off both flanks in taking the game 11-3.

Still, Yiangou to his credit tried to attack at every opportunity, though more often that not he had to be so precise that he ran the risk of an unforced error – or he simply found Pitchford there to turn his attack back against him. An 11-6 margin completed the victory.

Elia showed the confidence of youth – he is 16 – against Drinkhall, as well as a willingness to attack and a decent tactical brain.

He had good moments, such saving a game point in the first with a dismissive forehand flick off the serve. Drinkhall (pictured above, photo by Michael Loveder) took his next game point to win it 11-6.

But for all his intent to play the right way, he was never likely to have enough firepower against an opponent of Drinkhall’s calibre.

Elia led the second 8-7 before Drinkhall shut the door by taking the next four points, and the Cypriot kept battling in the third before succumbing 11-4, though he did save two match points, the second with some brave attacking play.

So, England are into the semi-finals, where they will face Singapore, who were 3-0 winners over Canada earlier today. The semi-final is at 4.30pm tomorrow.

The other semi, at 7pm, sees Nigeria take on India. The latter defeated Bangladesh 3-0 with no alarms, but Nigeria were extended by Malaysia, winning it 3-2 having trailed 1-0 and 2-1. Aruna’s double was, unsurprisingly, the key.

Afterwards, Pitchford said: “I knew this guy could play. I knew I had to be ready and I was, I played one of the best matches I’ve played for a long time. I was focused, I was playing well, I didn’t give him a chance as I knew he would take it if I did.

“Tomorrow is probably another step up so we need to be ready again. They are all good players and have a strong doubles pair. We need to get the first point on the board and put them under pressure.

“They are a bit more inexperienced than us so if we can capitalise on that and put them under pressure from the start, we stand a good chance.”