Lancashire and Middlesex dominated the Cadet weekend of the County Championships, but it was the northern team which took the honours with a 100% record. 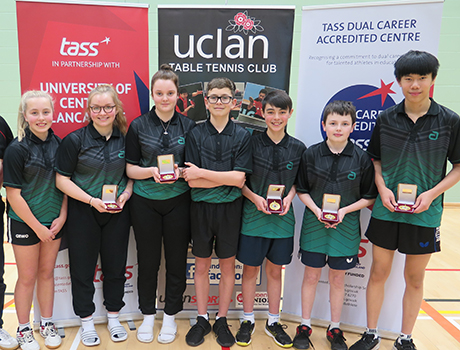 Lancashire and Middlesex dominated the Cadet weekend of the County Championships, but it was the northern team which took the honours with a 100% record.

The top two met early in the competition – in the second round – and Lancashire prevailed 8-2 to lay down a marker for the rest of the weekend.

Not that they had it all their own way as their third-round opponents Derbyshire pushed them to 6-4 thanks to Naomi Coker’s double and singles for Joseph Cooper and Connie Dumelow. Lancashire were never behind, but did need Joseph Dennison to beat Dylan Ufton in the final match to seal a victory rather than a draw.

Middlesex kept up the pressure by winning all their remaining matches, but Lancashire clinched the title in the grand manner with a 10-0 romp against Kent. Derbyshire finished in third, four points off second place, with Surrey fourth.

Lancashire’s form was underpinned by Louis Cheung-Turner, who finished with a superb 100% record, winning all his 12 matches.

Team-mates Bethany Ellis and Joseph Dennison were only just behind, both winning 13 matches out of 14 for a 93% average. Nottinghamshire’s Fred Jones also deserves an honourable mention, winning 11 of 12 matches to also top the 90% rate.

The weekend was hosted by the University of Central Lancashire (UCLan) in Preston, who provided the venue for the weekend as part of a partnership with Lancashire County TTA and Table Tennis England, and who have table tennis as one of six focal sports at the university.

The competition also saw the first use of the TT Leagues platform, enabling clubs, players and parents to see all the results, tables and player averages during the weekend.

Click here to visit the TT Leagues site for all the weekend’s results and averages, plus the final table.

A number of matches were live streamed over the weekend and can be viewed on the Table Thttps://www.facebook.com/TableTennisEngland/videosennis England Facebook page.