The second weekend of the County Championships Over-60s Premier Division took place at Milton Keynes Table Tennis Centre. After a series of hard-fought matches, Kent emerged as winners of the Premier Division with Lancashire in the runners-up slot. 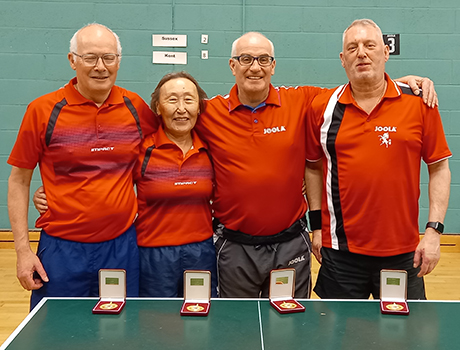 The second weekend of the County Championships Over-60s Premier Division took place at Milton Keynes Table Tennis Centre. After a series of hard-fought matches, Kent emerged as winners of the Premier Division with Lancashire in the runners-up slot.

As the teams entered the weekend, there was everything to play for – both at the top and the bottom of the division. At the top, just one point separated Kent, Sussex and Lancashire, while at the bottom, there were just two points separating Cheshire, Yorkshire, Warwickshire, and Essex.

Bedfordshire with 4 points looked to be heading for a comfortable mid-table position in their first season in the Premier. But with two teams to be relegated they would need at least a draw from their final four matches to ensure they weren’t drawn into the relegation battle.

At the end of the first round on Saturday, it was getting even closer with Essex securing a draw against high-flying Kent. Cheshire started their march up the table with a win against Warwickshire. Meanwhile, Lancashire beat Bedfordshire, and Sussex beat Yorkshire. As was characteristic of matches in this division – three matches were won 6-4 and one was a draw.

A similar pattern emerged in the second round. Cheshire were clearly pulling out all the stops to avoid relegation and secured a 6-4 win over Yorkshire. Warwickshire beat Bedfordshire 6-4 and Kent were again held to a 5-5 draw – this time by Lancashire. Sussex overpowered Essex 8-2.

So as we entered the second day, Sussex were top of the table with Kent and Lancashire in hot pursuit. But all remaining five counties faced the prospect of relegation unless they secured additional points in the Sunday session.

At the top of the table, two factors swung the pendulum in favour of Kent. Their number one player – Diccon Gray – was back from holiday and able to play in the remaining two matches. But also decisive in the Sussex vs Lancashire match was that Sussex number one – Nigel Eckersley – picked up a shoulder injury which meant he could take no further part in proceedings.

Lancashire duly beat Sussex 8-2, and Kent secured a 6-4 win over Bedfordshire, meaning that Kent and Lancashire were top of the table – equal on points but with Kent having a slightly superior sets ratio.

At the bottom, Yorkshire beat Warwickshire to keep their hopes alive of avoiding relegation. Bedfordshire’s defeat to Kent put them in the danger zone. But Cheshire’s 8-2 win over Essex meant that Cheshire had won three matches in a row and were now safe for another year in the division.

So for the final round, there were essentially two competitions taking place. Kent, Lancashire and Sussex battling for top spot, and Bedfordshire, Essex, Warwickshire and Yorkshire battling to avoid the drop.

Warwickshire secured a 4-1 lead in their match against Essex and looked to be safe, but a strong Essex fight back put them 5-4 up. It was all on the final mixed doubles. Whichever county won this final match would be safe for another year. That went Warwickshire’s way – meaning that both Warwickshire and Essex finished on 4 points, but with a slightly superior sets difference Warwickshire finished outside the relegation places, meaning Essex would be relegated.

Bedfordshire vs Yorkshire saw Bedfordshire race to a 5-1 lead. Yorkshire fought back to make it a very interesting 5-3 – but Bedfordshire secured the final men’s singles and mixed doubles to win the match 7-3. Yorkshire are relegated.

On the other two tables, another fine performance from Cheshire saw them draw with Lancashire – all but ending Lancashire’s hopes of securing the title. Kent ran out 8-2 winners against Sussex to secure top spot in convincing style. Lancashire had done enough to finish runners-up.

As with other Premier Weekends, TT Leagues software was used to manage the competition and provide regular updates on results and the Divisional Table. Given how close it was at both the top and bottom of the Division – this was invaluable.

From the Divisional Table you can access all the results, individual score-sheets, player averages (singles and doubles) and a wealth of other data. The results show just how hard-fought this competition was. Astonishingly, 18 of the 28 matches played in the competition finished 6-4 or 5-5.

Notable performances were from Diccon Gray (Kent) and Elaine Sayer (Essex) who won all their singles matches. Keith Williams (Lancashire) and Elaine secured most wins in the men’s and ladies’ categories.

Both O-60s Premier Weekends were played at Milton Keynes Table Tennis Club and the thanks of all players go to Alan Cherry and Terry Lau and the MK Table Tennis Club for making this excellent venue available for the competition.