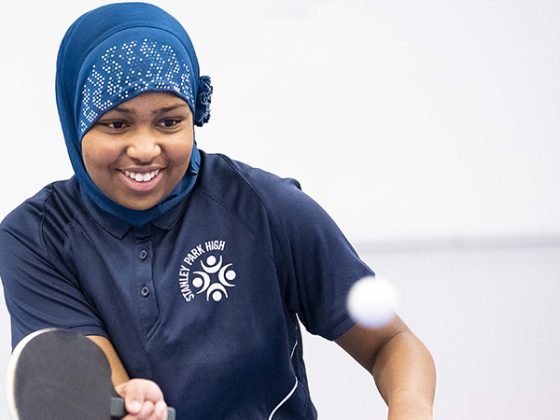 Rules governing playing kit for competitions in England are being made more flexible in response to feedback from female players.

Female athletes’ sport kit has been a highly debated topic this summer with many different examples in the media of how strict playing kit rules can negatively impact an athlete.

These include British athlete Holly Bradshaw taking a stand to change Team GB kit rules ahead of the Tokyo Olympics, and the Norwegian women’s beach volleyball team being fined for wearing shorts instead of bikini bottoms.

Table Tennis England’s #LevelTheTable diversity and inclusion strategy launched in September, aiming to make table tennis accessible and inclusive to everyone, including engaging more women and girls into the sport and remove potential barriers to their getting involved.

The rigidity of the competition kit regulation became a common theme in feedback from women in recent surveys including the joint project with TASS which can be found here.

The rule outlined that female playing clothing had to consist of a short-sleeved or sleeveless shirt and shorts or skirt or one-part sports outfits. Anything not on that list could only be worn with permission from the referee.

This inflexibility of kit options is a clear barrier for some female players, often leading to dropping out of the sport. Although permission can be given to wear different clothing, this is a perceived barrier which prevents players from seeking permission and choosing not to play instead.

The 2021 Membership survey included this feedback on kit from a female player: “Women are usually wearing very short shorts and T-shirts and it may be seen as being the norm/obligation, putting off females who would prefer not dress this way (more conservative/modest clothing groups such as Muslim women, etc)”.

It was clear that the rule needed to be reviewed to be more flexible, and with support from the Technical Official Committee (TOC), the Board and staff members, the below will be implemented for English competitions going forward:

4.1.4 (ITTF 3.2.2) Playing clothing shall consist of a shirt and shorts, trousers, leggings or skirt, or a one-part sports outfit, socks, and playing shoes. A sports hijab may also be worn. Other garments, shall not be worn during play except with the permission of the referee.

4.1.5 The main colour of a shirt, shorts, trousers or skirt, other than sleeves and collar of a shirt, shall be clearly different from that of the ball in use.

There will also be a wider engagement piece with clubs and leagues around the importance of flexible kit options and specific clothing for women and girls. This will also be shared wider to kit suppliers based in England, to discuss the possibility of appropriate, and affordable, additions to their stock

Table Tennis England National Participation Manager Jenny Leach has led on the conversations to highlight the reasons for this important rule change.

She said: “The rule change allowing more flexibility on what can be worn at events is such an important change in the sport. I really hope this encourages more female players to wear what they feel comfortable in and play more of the sport they love.

“This is the first step in making table tennis a place for everyone, with the launch of the #LevelTheTable strategy which has a key focus on engaging more women and girls into the sport.

“A big thank you to the members of TOC and Colin Clemett for their support and advice given during this process.”