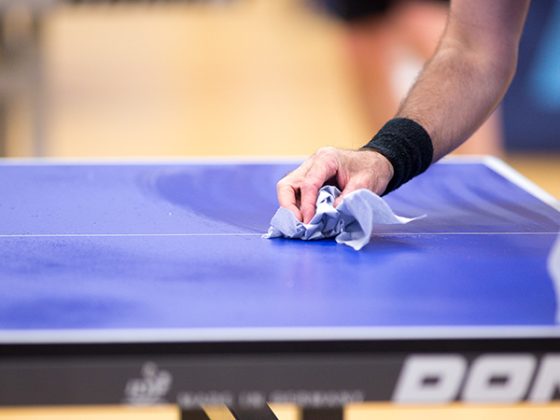 Windsor Buzzards produced an early New Year shock in Division Two of the Clacton & District League when they out-classed Lawford to take an impressive 8-2 victory and move into the second promotion spot in the table.

Andy Cawley and Dave Martin both took excellent trebles, whilst Pete Bloomfield contributed an important 3-2 (11-7, 6-11, 11-13, 11-9, 11-5) win over Ian Sherwood and shared a doubles success with Cawley. Richard Spence and Charlie Denholm took a consolation point each for Lawford.

Brotherhood B extended their lead at the top with an 8-2 win over club-mates Brotherhood D, Martin Scarfe and John Owen remaining unbeaten, and a returning Paul Alden winning one but just going down 12-10 in the decider to Mark Beckham. For the ‘D’ team, Beckham and Paul Metcalf each won one.

In the first of two matches involving teams struggling at the bottom of the table, Windsor Kestrels enjoyed a fine 6-4 victory over Windsor Harriers, taking three of the four matches which went the distance. Graham Bunce won three and Debra Found two, with the pair sharing a match-winning doubles success.

Ferdy Rodriguez won a couple for the Harriers and although Jenny Higgins won only one, she will feel unfortunate not to have taken more, going down 11-8 in the fifth to Found and 12-10 in the fifth to Bunce.

In the second relegation clash, every player picked up at least one point as Brotherhood E edged out Nomads Bobcats 6-4. Duncan Dunne starred for Brotherhood with an unbeaten three and shared a doubles victory with Rodney Betts, whilst Tony Edmonds and Betts, who defeated Andy Teemal 3-2 (10-12, 11-8, 10-12, 11-6, 12-10), won one each.

The meeting of the sides in third and fourth positions ended all-square, Windsor Magpies recording a draw for the first time this season in their match against Brotherhood F.

Dominic Joannou produced his best form of the season to stay unbeaten for Nomads Lynx against Nomads Leopards but it was not enough to prevent his side going down 6-4. Stuart Wilkinson and Dave Wright won a couple each for the Leopards, and shared a doubles win, whilst Lionel Goddard took one but went down 11-5 in the decider to Adrian Sexton.

There was an important encounter at the bottom of Division One between Walton C and Nomads Lions, and it was the Walton side who triumphed 10-0 against their relegation rivals to take a massive step to safety. Peter Burrows won his three, and there were also first hat-tricks of the season for Graham Buxton and Paul Newbould. It was also Walton’s first win of the current season.

Third-placed Walton B beat Brotherhood A 6-4 for a second time this campaign. Every player picked up at least one point but Walton’s Kevin James maintained his good form with a sixth treble of the season. Kevin Gowlett won a couple for Brotherhood.

* The draw for Round One of the knockout stage of the Handicap Cup sees just one all-First Division tie, with Windsor Hawks hosting Nomads Lions. The remaining four top-flight teams have been drawn against lower-Division opposition, the most intriguing tie seeing reigning League champions Nomads Panthers facing the young guns of Third Division Windsor Merlins.

Matches are to be played during week commencing 31st January.

* The Handicapped Singles Tournament takes place on Sunday 13th February at the Coastal Academy Sports Hall, with play starting at 10am. Entries should be sent by e-mail to Peter White or by post to Tony Oswick. The closing date for entry is Sunday 6th February. Full details are on the League’s website.