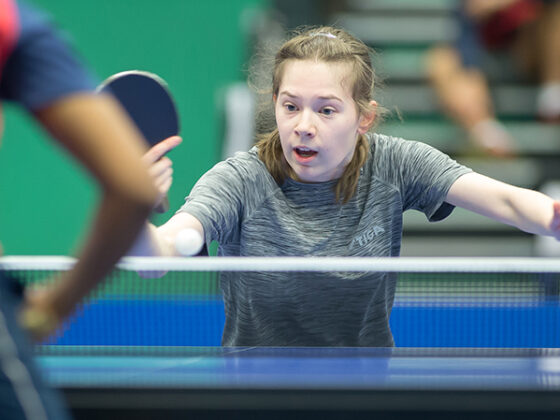 Leading Juniors Charlotte Bardsley and Ethan Walsh are relishing the unexpected chance to add another title to their respective CVs at the rescheduled Mark Bates Ltd Cadet & Junior Nationals.

When last year’s event was cancelled due to the pandemic, it looked as if neither would get the chance to sign off their Junior careers at the foremost domestic tournament for that age group.

But the extension of the age group from Under-18 to Under-19, coupled with the easing of restrictions, means they will get that opportunity after all with the event back on the calendar for the weekend of 10th-11th July.

Although both have previously taken singles gold at the event – Walsh is the defending champion from the last edition in 2019, while Bardsley was the 2018 winner – they are still looking forward to that final tilt at Junior domestic glory.

Bardsley said: “It’s good to have the chance after last year was cancelled, especially because it was supposed to be my last year.

One of the international competitions on the horizon is the European Youth Championships later in July, a major target for Bardsley, who has been training in Germany with her club TTC Langweid.

She said: “I’m working towards the European Youths which is my goal this summer, and the Nationals is a step along the way – getting some match preparation for the Europeans is good.

“I’m working very hard in Germany and working towards it, trying to improve aspects of my game so hopefully on the day it will all come together.”

On the potential of not being ‘match-hardened’ going into the competitions, she added: “Our league was cancelled but a least I still had an opportunity to train here and play matches in the training hall against good players, so I’m not too worried about that.”

Walsh’s preparation has been very different and he has only recently returned to training after more than a year off – he last played at the Junior British League weekend in early March 2020, the week after the Senior Nationals.

But he has not been idle, using the time to work on his fitness as well as starting his first full-time job, as a sales apprentice for a Letchworth company which supplies environmental monitoring equipment.

He said: “It’s been a long time off. It’s only really the last month or so I’ve been back training and getting used to it all again.

“The first few sessions, I could feel a bit of rust and it took me a while to get back, but now I feel really good.

“I made the most of lockdown by trying to get myself in better condition. I was a bit heavier than I should have been and I’ve lost one-and-a-half stone and I feel physically in a better place.

“Now I’m training again, it’s motivated me to become an even better player and get my level higher, and getting my mindset into competitions again – hopefully that won’t take too long.”

Walsh is also aiming for the European Youth Championships, but is not sure how stepping back into competition will feel.

He said: “After so long, I don’t think anyone knows what level people are going to be at. Before, we all played each other all the time and knew each other’s games, but after more than a year, that’s gone out of the window.

“I don’t want to put too much pressure on myself, it’s more about getting back that sharpness and working towards the Europeans, because I don’t just want to get to them, I want to perform.”

Both young champions agree that getting back to tournament play will be a huge positive after the last 15 months. Both are also likely to compete at the Junior National Cup at Halton TTC on 19th-20th June.

Bardsley said: “When you’re in the middle of a match and fighting for every ball and the adrenalin is flowing, that’s what I’ve missed, along with being in a tournament with people around. It’s been over a year and it seems such a long time since I’ve felt that.”

Walsh added: “I was looking forward to defending my title last year and now to get that unexpected chance is definitely really good for me. I’m happy I’m getting the chance to have a go at it and seeing where everyone is with their games.

“The social side is a big part of it as well. I see the guys as my friends and we’ve travelled all over the world together. It’s going to be competitive on the table but when you’re off the table people forget about that.”