Centenary Stories: Tom Hollingsworth, champion either side of war

In the latest of our Centenary Stories series, today we return to the England team which played in the first international match against Wales in March 1923. 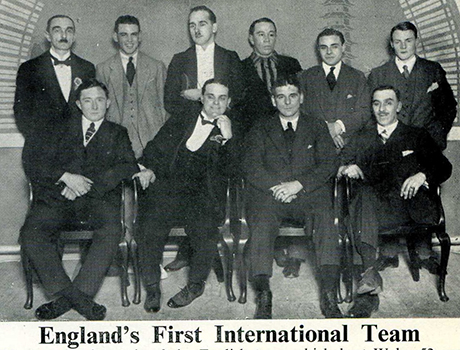 In the latest of our Centenary Stories series, today we return to the England team which played in the first international match against Wales in March 1923.

Included in the line-up was Tom Hollingsworth, a national champion both before and after the First World War.

When Percy Bromfield won the English title in 1904 there would unfortunately not be another championship until 1913. The winner of that event was Tom Hollingsworth of Wednesbury.

Having beaten the Midland Counties champion, William Evans, the year before, 20-year-old Tom then defeated the North of England champion, Andrew Donaldson, on 7 February 1913 in the single game played for the Ping Pong English title, by 100 to 69 points.

With the intervention of the First World War, during which Tom fought at the Battle of the Somme, the next English championship final would not be until 27 March 1920, which was a repeat of 1913, as Donaldson had defeated David Woodward for the right to play the holder in the final once again.

This time it was staged at Sunderland, but nevertheless the outcome was the same, with Tom retaining his title by 200 points to 195. A year later on 1 April 1921, Tom would relinquish it to the same opponent by 200 points to 196, and Donaldson would retain the title the following year against Austin Carris.

Six months after his marriage in 1922, Tom decided to enter the first nationwide Daily Mirror competition and received a gold medal. It is recorded that he reached the last 64, but did not make the semi-finals played on 2 May 1923 – the results of the intervening rounds have been lost.

However, as a result of his achievements at that time, he was selected to represent England in the very first international table tennis match which was played against Wales on 9 March 1923, where he won four out of his eight matches.

Having originally used a vellum bat early in his career before making his own wooden ones for play by 1913, Tom’s comments on his amazement at the speed and spin emanating from the latest creations were recorded when he was interviewed by noted broadcaster Tony Francis for a radio broadcast when he went along to the 1977 World Championships in Birmingham.

He passed away in 1985 at the age of 92 without any mention in Table Tennis News. The only mention until quite recently was in the Foreword for the 1939 English Open Souvenir programme by Bill Pope (the ETTA General Secretary), who confirmed Tom as the English champion from 1913-1920.

The photo of the first England team is one of hundreds featured in our centenary book English Table Tennis at 100: A Century in Photographs.

We are taking orders for both the Official Edition and a limited-number autographed Special Edition featuring the signatures of Desmond Douglas, Jill Parker and Will Bayley, three of the greats of the English game.