Centenary Stories: Through the eyes of Kelly Sibley 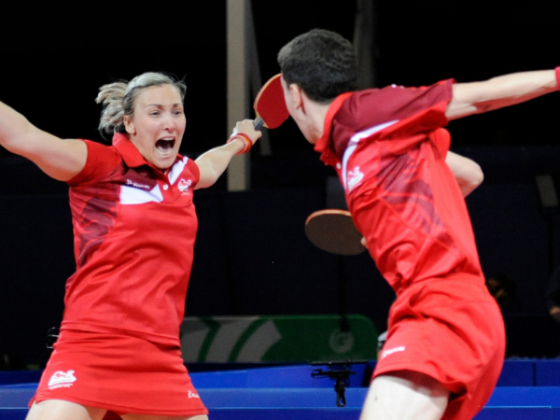 It’s an iconic photo in the recent history of English table tennis – this week’s Centenary Story focuses on the moment that Kelly Sibley & Danny Reed won the mixed doubles bronze medal at the 2014 Glasgow Commonwealth Games, through the eyes of Sibley, who hit the winning shot.

Reed & Sibley were defeated by Paul & Jo Drinkhall in the semi-finals, while Liam Pitchford & Tin-Tin Ho had also booked a place in the final. Could Reed & Sibley ensure a clean sweep of the medals for England?

It was a tough task as they took on the pair from Singapore, Jian Zhan & Feng Tianwei, who were ranked No 34 and No 4 in the world respectively and were the top seeds.

When the English pair lost the first game, dreams of that lock-out of the podium were fading. However, roared on by a Home Nations crowd, they came back to take the next two games and, from 10-10 in the fourth, won the next two points to clinch the medal.

It resulted in the memorable photo on this page, which shows the sheer joy etched across Sibley’s face as she leaps into a celebratory embrace with her partner.

This photo features in our Centenary book – English Table Tennis at 100, a Century in Photographs – alongside hundreds more of the iconic events and people who have shaped our sport. We are currently taking pre-orders for the book, which will be published next month.

But more of that amazing Glasgow image. How much does Sibley remember about the moment that delivered her biggest prize in table tennis at that time?

“It’s still very clear, to be fair,” said Sibley, who is now lead coach for the England Hopes squad.

“It was really close at the end and I remember not trying to get too carried away with the moment. I felt quite calm really, but also excited feeling that something good was possible, but managed to keep everything controlled and focused on the next ball.

“Me and Danny gelled very well and had 100 per cent trust in each other. We talked about trying to keep it simple and tight if possible, but to try to get in first.

“It was 10-10 and Danny served and they attacked it, but I made a really nice re-loop. It was about being confident and fully committed to the ball and thankfully that was a winner.

“Then we received and I played a backhand down the line for a winner – I remember it going down the line and her not getting to the ball and it was like ‘that’s it!’

“It was an amazing feeling . . . completely overwhelmed to finally win the Commonwealth Games medal I had always wanted and to achieve that in the UK, close to a home Games, it was amazing.

“I can still hear the crowd and seeing my parents and Laura in the crowd and our team-mates going wild. It was an amazing and surreal moment.

“A lot of people still mention the star jump – you can see the joy it brought to us!”