In the latest of our series of Centenary Stories, we focus on James Thompson, an early pioneer of rubber table tennis bats, who played in the inaugural World Championships in 1926. 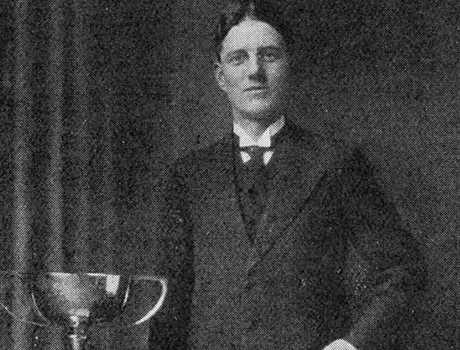 In the latest of our series of Centenary Stories, we focus on James Thompson, an early pioneer of rubber table tennis bats, who played in the inaugural World Championships in 1926.

Thompson was synonymous with Bristol, where he played in the oldest league in the country. John Ruderham of the Bristol & District League takes up the tale.

James Thompson first started playing table tennis is 1904 and the Daily Mirror reported that he was the West of England champion in 1909.

Because he adopted the use of a rubber-faced bat from his earliest days, he only played one local league match, as the Bristol barred the use of rubber until the early 1920s. He therefore formed his own Comity Club and played several friendly matches with other local leagues.

When the Daily Mirror advertised its nationwide competition in late 1922, James Thompson decided to become one of the 40,000 entrants, and duly reached the semi-final in May 1923, where he beat the 1904 English champion, Percy Bromfield.

Going on to beat Herbert Anning Bennett in the final, he returned to Bristol with the winning trophy and the keys to a new Calthorpe car!

In December 1923 he played for a strong England team in their second international match against Wales, in which all the England players won their matches.

He also entered the first World Championships in London in December 1926, but was unfortunately drawn against the eventual winner of the Men’s Singles event, Dr Roland Jacobi, in the first round.  However, James was chosen as a member of the English national team that won the bronze medal.

In the English Open at the same venue four months later, James was again unlucky to be drawn in the first round of the Gentlemen’s Singles against the eventual winner and title holder, Raja Gopal Suppiah of India.

James was, however, selected to captain the England team against Wales in 1926/1927 and would be again when they beat the Irish Free State in January 1933.

At the English Open in April 1928, James defeated William Hewitt in the Men’s Minor Singles final, only dropping one set throughout the whole event, and in March 1934 he entered the English Open Veterans’ Singles and beat Alfred Wilmott of London in the final, thereby claiming a second individual title at these prestigious championships.

As an ETTA Vice-President for 20 years, and an ETTA Executive Committee member representing ‘directly-affiliated clubs’ on behalf of Bristol back in 1927, James was one of just 100 attendees at their Silver Jubilee Luncheon held in London on 26 April 1952.

He passed away at the age of 79 on 12 November 1967 in Chipping Sodbury after a long illness.