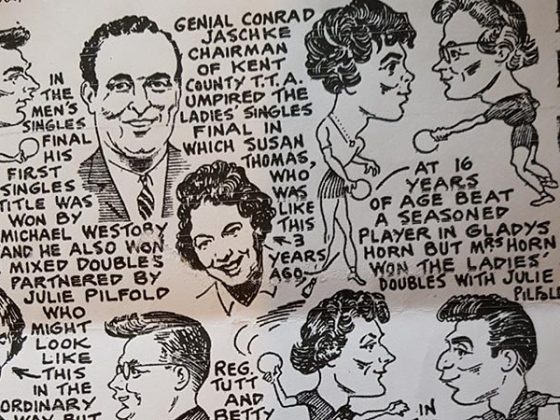 Most of our members will have played a game which seemed to go on forever, with neither player able to get that all-important two-point advantage – but has anyone ever got as far as 38-36?

In our series of Centenary Stories as we celebrate our 100th year as the governing body of table tennis in England, we feature a man who took part in a game which was hailed as a world record score.

That man is Michael Westoby, who has written to us from Brisbane in Australia to tell us about his match against John Martin in the third round of the English Closed Championships – now our Senior Nationals – in March 1963.

Now aged 82, he says: “In the 60s, I was a table tennis player travelling all over England playing tournaments and teaching at schools.

“I was taught by (England international) Harry Venner and had beaten Chester Barnes at Wimbledon. In 1963, I played in the English Closed Championships and in the third round won a game 38-36, a world record in any national tournament. I consider it is quite an achievement.”

Michael enclosed a cutting from the Table Tennis News magazine, in which Charles E Davies’ wrote about the feat the following year in his column More Table Tennis Memories.

Davies wrote in the March 1964 edition: “Mike Westoby is not a world-beater at table tennis. He is rather, a talented league player and as such represents the Bromley League. Nevertheless, he is a table tennis world record holder.

“I saw him achieve his record last year in the English Closed Championships when he beat John Martin 3-1 in the third round. Nothing remarkable in that? Quite so. What was remarkable was the third game score, 38-36, a world record for deuce points in an Open.”

It is probably impossible to verify the record, but what we know for certain is that Michael was beaten by Bobby Stevens, who was the defending champion, in the quarter-finals. The title was won by Chester Barnes, the first of his five men’s singles titles.

Michael added: “Johnny Leach wrote an article afterwards saying I had one of the best backhand attacks which I had seen in years.

“Sadly, my table tennis was over not long afterwards due to a motorcycle accident on the way home from the Middlesex Open. Six months later, after having my left leg in plaster, I continued to play, but took up golf.”

The table tennis story does not quite end there – Mike competed in and won a golf tournament for table tennis players, organised by Johnny Leach. The first prize was a putter made by Leach’s sports equipment company.

Michael said: “He made me a special putter, being left-handed, and it is the only one made. 60 years later and it still looks new and I have played with it 4-5 days a week all this time, with a handicap of between 5 and 8 up to five years ago. I now only play twice a week because of my age.”

Michael also enclosed these wonderful cartoons by the artist Syd Jordan, drawn at the Woolwich and District Table Tennis Association finals, and including Mike (top left).

Do you have a Centenary Story to tell? Contact us via [email protected]