Bronze for Williams in Montenegro

Grace Williams has underlined her potential by taking bronze in the women’s class 7-9 singles at the Montenegro Para Championships in Podgorica, her first international singles medal. 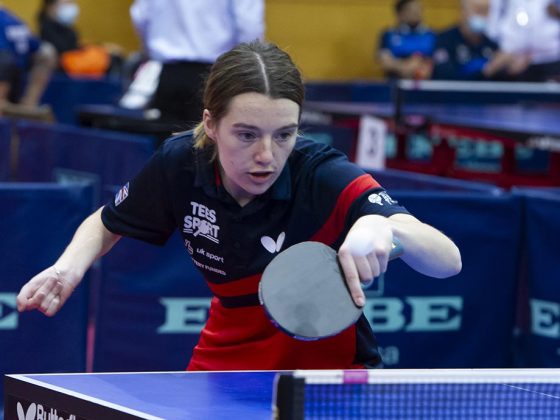 Grace Williams has underlined her potential by taking bronze in the women’s class 7-9 singles at the Montenegro Para Championships in Podgorica, her first international singles medal.

With 11 athletes from the British Para Table Tennis Performance squad unable to travel to Montenegro after their flight from London Gatwick Airport was cancelled, only the Welsh teenager and four members of the Pathway squad who flew out on an earlier flight from Manchester Airport have been able to compete at these championships.

Lee York lost in the quarter-finals of men’s class 4 and Andrew Guy (men’s class 2), Dan Bullen (men’s class 5) and Theo Bishop (men’s class 7) all went out of their respective events at the group stage after some very close matches.

Williams (pictured above) faced the class 8 world No 2 Aida Dahlen from Norway in her opening group match and the 31-year-old two-time European champion and world and Paralympic bronze medallist was too strong in a 3-0 win.

The 19-year-old from Llanfyllin won her second match against 22-year-old Maria Kaipi from Greece 3-1 and secured her place in the semi-finals with a fine 3-1 win against fellow teenager Magdalena Sutkowska Pawlasek from Poland, who had won their only previous meeting 3-0 at the French Para Open last year.

In the semi-final she faced Juliane Wolf from Germany and the class 8 world No 5 took the first two sets. Williams fought back well to take the third 11-4 before the former World and European medallist secured her place in the final, 11-4 in the fourth.

“The tournament has so far been a great experience,” said Williams, “winning my first singles medal and beating players who I had lost to previously. I’ve demonstrated that to become a better player I need to believe in myself and play my own game on the table.

“My match against Magdalena was tough as I lost to her last year – this time I set out to play my own game but to be more controlled and take my time. The sets were close apart from winning the last against Magdalena 11-0. I feel that I am improving against the top players.

“I didn’t expect to take a set off Wolf but I played really well and used tactics to avoid her exploiting my weaknesses. The semi-final showed me that I can get to the top level if I keep working hard.”

Lee York was beaten 3-0 by the Paralympic team bronze medallist and former world No 3 Peter Mihalik from Slovakia but then played really well to beat Sebastian Vegsund, the European team bronze medallist from Norway, 3-1 to progress to the knockout stages. In the quarter-final he played Tomislav Spalj, the bronze medallist in the Costa Brava Spanish Open in March who had beaten York in the Slovenia Open last month, and the Croatian was just too good again, winning in three competitive sets.

Dan Bullen had a tough opening match against European silver medallist Mitar Palikuca from Serbia and the world No 6 and former world and Paralympic medallist was a 3-0 winner. He needed to win his final group match against Daniel Staszak to progress to the semi-finals and fought back from 2-1 down to edge the fourth set 14-12 but the 39-year-old from Poland took the deciding set 11-9 for a 3-2 win.

Teenager Theo Bishop put up a great performance against the 28-year-old European team bronze medallist from Poland Michal Deigsler, twice fighting back to level before the world No 18, silver medallist in the Costa Brava Spanish Open in March, took the deciding set 11-7. Bishop followed that with a comfortable 3-0 win against Zoran Cabarkapa from Montenegro and played another good match against Ben Despineux but the two-time European team champion and World team bronze medallist from Belgium used all his experience to win 3-1 and deny Bishop a place in the quarter-finals.

The inexperienced British squad missed out on a medal in the doubles events but gained more valuable experience against some of the world’s best players.

Theo Bishop and his class 6 partner Eleftherios Mavris from Greece lost their opening match in the men’s doubles (MD14) to the class 6 pair of Thomas Rau, the European bronze medallist from Germany, and Bobi Simion, the European silver medallist from Romania, 3-0 and did not progress after a 3-0 loss to class 8 Vit Spalek and class 6 Petr Hnizdo from the Czech Republic.

Bishop teamed up with another class 6 Greek player Eirini Drakonaki in the mixed doubles (XD14) and they lost their opening match to class 6 Haris Eminovic from Bosnia Herzegovina and class 6 world No 4 Stephanie Grebe from Germany 3-0. They were then beaten 3-0 by class 7 Pjetro Paljusevic and class 6 Milijana Cirkovic from Montenegro and lost their final group match against Michal Deigsler, the class 7 European team bronze medallist, and class 6 Barbara Jablonka from Poland 3-0.

“I think that I played quite well in this tournament,” said 19-year-old Bishop. “It was tough to come so close again in the singles and not be able to close out the matches, but I just have to remain confident that if I keep working the way I am eventually the results will come. I know what I need to work on technically going forward and I feel that the experience I have gained over the past few tournaments will serve me well in the future.”

In the men’s doubles (MD8) Dan Bullen teamed up with Gonzalo Acosta, the class 3 former PanAmerican Championship medallist from Uruguay who was competing for the first time since 2019. They started well in their first match against the class 4 Polish pair of Rafal Liz, European bronze medallist, and world No 6 Krszysztof Zylka leading 1-0 and 2-1 before losing 11-7 in the fifth. They lost their second match against the class 4 pair from Serbia Aleksandar Jevremovic and Nebojsa Ilic 3-0 and were beaten 3-0 in their final match by the class 3 pair from Slovenia Bojan Lukezic and Primoz Kancler from Slovenia, who were bronze medallists in the Costa Brava Spanish Open in March.

Bullen and Samra Kojic from Montenegro lost their opening match in the mixed doubles (XD4-10) to the strong Serbian pair of class 3 Mladen Ciric and class 4 world and European champion Borislava Peric-Rankovic 3-0 and were then 3-0 winners against the class 1 pair of Gregorios Chryssikos, silver medallist at the Al-Watani Para Championships in Jordan, and 16-year-old Evanthia Bournia from Greece. They did not progress after a 3-0 loss to Iker Sastre, the class 2 three-time European team bronze medallist from Spain, and Caroline Tabib, the class 5 world bronze medallist from Israel.

“I’ve had some close matches again,” said Bullen. “I felt I played really well in the singles against Daniel Staszak and I think I did everything right but I need to work on taking the pace off my blocks and when it got close my forehand spin-up got a bit tentative and a bit tight.

“It has been very good experience to be in such a hot country trying to play your best and it has not been easy. I feel that I’m dealing with the pressure in the tight matches a lot better than I was this time last year and what I have been working on in training is starting to pay off in my matches.”

In the men’s doubles (MD8) class 2 Andrew Guy and class 4 Lee York were beaten 3-0 in their first match by the experienced class 3 German pair of world and European team gold medallist Thomas Bruechle and two-time European team gold medallist Jan Guertler but kept their hopes of progressing alive with a 3-0 win against class 1 Marian Kamien from Slovakia and Daniel Staszak from Poland, bronze medallist in the men’s class 5 singles here.

“It’s been another tough competition for me,” said Guy, “with a lot of highly ranked players, giving me a lot to work on back home. I’m looking forward to getting my new playing chair which should open up some new possibilities and improve my overall play.”

In the mixed doubles (XD4-10) York and Slobodanka Guresic from Montenegro renewed their partnership after playing together in the Slovenia Open last month. They had a tough opening match against Bruechle and class 4 world No 5 Sandra Mikolaschek which the German pair won 3-0 but won their second match against class 2 Peter Lovas and class 4 Jana Valentova from Slovakia 3-0. They finished in third place in their group so did not progress after a 3-1 loss in their final match to class 5 European silver medallist Mitar Palikuca and class 2 European silver medallist Ana Prvulovic from Serbia.

“I feel like I’ve played well this week,” said York. “I’m becoming more positive and dictating points rather than being dictated to by my opponents. I will certainly be taking away some new tactics that I have picked up this week and I feel that I am not far from going up another level and closing the gap to the top players.”

Grace Williams, whose intended doubles partners Fliss Pickard and Joshua Stacey were among the 11 Performance players unable to compete here due to their flight being cancelled, teamed up in the round-robin women’s doubles (WD14-20) with class 7 Pilar Gonzalez from Spain and they had a great battle in their opening match against the teenage Polish pair of Barbara Jablonka and Magdalena Sutkowska Pawlasek which they eventually lost 11-8 in the fifth.

They lost to class 8 world No 5 Juliane Wolf and class 6 world No 4 Stephanie Grebe from Germany 3-0 and were then beaten 3-0 by class 8 World number two Aida Dahlen and class 7 two-time European team medallist Nora Korneliussen from Norway. Williams and Gonzalez finished with a win, recovering from losing the first set to beat Eirini Drakonaki and Maria Kaipi from Greece 3-1, but finished outside the medals.

In the mixed doubles (XD17-20) Williams and Aviv Gordon from Israel, the men’s class 9 singles gold medallist, took the first set against Pablo Jacobsen, the class 8 French Open bronze medallist, and Aida Dahlen but the Norwegian pair came back to take the match 3-1. Williams and Gordon lost their second match against Pavao Jozic, the class 7 European silver medallist, and Mirjana Lucic, the class 9 world team champion from Croatia 3-1 but won their final match against Steffen Salomonsen and Nora Korneliussen from Norway 3-0. They finished in third place in the round robin event but missed out on a medal with only gold and silver awarded.

“It’s been an experience playing with different nations,” said Williams, who won her first international singles medal yesterday. “It’s good to have different partners as you get to learn different styles of playing.”