Bronze for Williams in France

Welsh teenager Grace Williams took bronze in the women’s doubles W20 whilst Sue Bailey and Scott Robertson made it through to the knockout stages of the mixed doubles XD10. 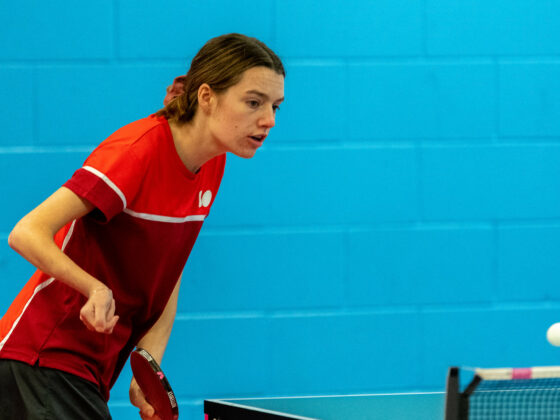 Welsh teenager Grace Williams took bronze in the women’s doubles WD20 with Frenchwoman Lucie Hautiere on the final day of the SQY French Para Open in Saint Quentin en Yvelines today. Partners off the table Scott Robertson and Sue Bailey made it through to the knockout stages of the mixed doubles XD10 but missed out on a medal after losing in the quarterfinals while Robertson also lost in the quarterfinals of the men’s doubles MD8 with his French partner Francois Geuljans.

Grace Williams and Lucie Hautiere, the 21-year-old Egypt Open champion from France, received a walkover in their first match when the Danish/Swedish pair of Thea Nielsen and Anja Handen withdrew and they won their second match against Olaia Martinez and Pilar Gonzalez from Spain 3-0. The class 8 British/French pair faced a tough task in their final match against the class 10 pair of 2020 Chile Open gold medallist Nozomi Nakamura from Japan and European team bronze medallist

Marlene Reeg from Germany but they pushed them all the way, taking the third set 12-10, before Nakamura and Reeg secured a 3-1 win in the fourth.

Having finished second in the group they went through to the semi-finals where they faced the European team champions, class 9 World number six Neslihan Kavas and class 10 World number six and European silver medallist Merve Demir, and the Turkish pair were 3-0 winners.

“I feel that I’ve played really well in this tournament,” said Williams. “It was a great experience playing with Lucie and winning bronze with her. I’m looking forward to Slovenia this week now and aiming to control my emotions better – before and during matches.”

Class 5 Robertson and class 4 Bailey started well in their match against the class 5 Korean pair of Park Jae Hyeon and Jung Young A taking the first set 12-10 but the Asian championship team bronze medallist and women’s class 5 World number four just had the edge in the next three to secure a 3-1 win. Robertson and Bailey beat teammate Simon Heaps and his American partner Valerie Ann Rolph 3-0 and then needed to win their final match against the men’s class 5 World champion Ali Ozturk and women’s class 3 World number 10 Hatice Duman to progress from their group. It went to a deciding set after the Turkish pair twice levelled the match and it was Robertson and Bailey who came out on top, taking the set 11-7 and the match 3-2.

They played Asian Youth Games champion Norakan Chanpahaka and Panwas Sringam, gold medallist in last year’s Paralympic World Qualification Tournament, in the quarterfinals and the pair from Thailand just had the edge in three close sets, taking a time out before clinching the win on their fourth match point 13-11.

Heaps and Rolph went out at the group stage after losing 3-0 to Turkey and 3-0 to Korea.

Robertson and class 3 Geuljans from France won their first match against the class 5 PanAmerican silver medallist Ahad Bakhshaei Sarand and class 3 Tokyo bronze medallist Jenson Van Emburgh from USA 3-1. They had a great battle in their second match against Simon Heaps and class 3 Frenchman Stephane Gil-Martins which went to a deciding set. Robertson and Geuljans led 5-2 but Heaps and Gil-Martins levelled at 6-6 before Robertson and Geuljans pulled away to take the set 11-7 and the match 3-2. That was enough to secure a place in the knockout stages despite a 3-0 loss in their final match to class 3 world number nine and Tokyo team bronze medallist Yuttajak Glinbanchuen and class 4 World number six Wanchai Chaiwut from Thailand.

Robertson and Geuljans took on class 3 Tokyo and Rio team bronze medallist Anurak Laowong and Chanpahaka from Thailand in the last 16. They led 2-0 and after dropping the third set had match point at 11-10 in the fourth but the Thai pair saved it and went on to level at 2-2. Robertson and Geuljans established an 8-5 lead in the deciding set and maintained their advantage to take the set 11-8 and the match 3-2.

That took them through to a quarterfinal against the class 5 Asian Championships team medallist Park Jae Hyeon and class 3 Jang Yeongjin. The Korean pair had come through their group unbeaten and they were too strong for Robertson and Geuljans, taking the match 3-0.

Heaps and Gil-Martins did not progress from the group after a 3-0 loss to Thailand and a 3-1 loss to USA.

Class 2 Andrew Guy and class 4 Lee York were up against it in Group 4 and lost their opening match 3-0 to the French pair of class 4 World number three and three-time European champion Maxime Thomas and class 5 European team gold medallist Alexandre Delarque. They were beaten 3-0 by

Tsuyoshi Watanabe and Tetsuya Tamatsu from Japan and lost their final match to Laowong and Chanpahaka 3-0.

The class 7 pair of Theo Bishop and 22-year-old Hwang Inchun from Korea were beaten 3-0 by class 6 former European team bronze medallist Michael Azulay and class 8 former World number one and World and Paralympic medallist Emil Andersson from Sweden. They then fought their way back from 2-0 down against Dustin Eier and Yannick Paredis from the Netherlands to level at 2-2, and again showed great determination in the final set to come back from 5-1 down to win 11-8. Bishop and Hwang played well against the experienced class 7 French pair of World and European team medallist Kevin Dourbecker and former Paralympic champion Stephane Messi but a 3-0 defeat left them in third place in their group with only the top two going through.

Sue Bailey teamed up with Hatice Duman from Turkey and they lost their opening match in three close sets to the French pair of class 5 World number eight Alexandra Saint Pierre and class 4 Flora Vautier. They lost 3-0 to class 4 World number nine and four-time PanAmerican champion Joyce De Oliveira from Brazil and class 4 World team medallist Faten Elelimat from Jordan and although they won their final match against the American/Spanish pair of Valerie Ann Rolph and Cristina Rubio 3-0 they finished in third place in their group and did not progress.

The full list of British athletes competing in the French Para Open is: