Bringing Ping! to the people of Leyland

On Wednesday 6th April on World Table Tennis Day, people of all ages across Leyland were invited to celebrate the launch of the community’s first ever Ping in the Community programme with special guests Jill and Don Parker. 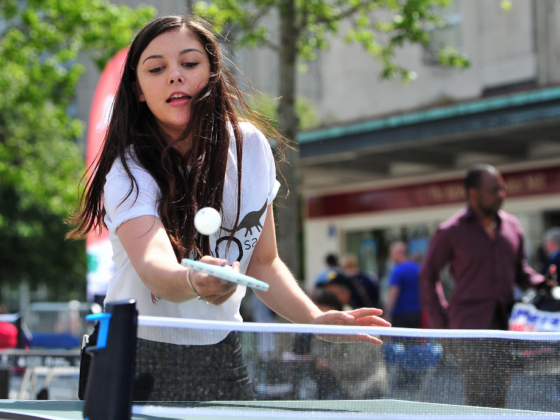 On Wednesday 6th April on World Table Tennis Day, people of all ages across Leyland were invited to celebrate the launch of the community’s first ever Ping in the Community programme and find out about where all the places to play will be popping up through spring and summer.

For over 10 years, Table Tennis England has supported hundreds of Ping! projects across the country, with this initiative marking the first time we’ve supported a project on this scale across South Ribble.

The event boasted six free tables to play on, hosted within South Ribble’s Civic Centre and featuring special appearances from Table Tennis England’s very own board members Don and Jill Parker MBE, who being ‘Prestoners’ themselves, were only too glad to show support, give tutorials and a have a few games with the local community.

The Council will be fully funding and installing table tennis tables across the borough at six different venues, with another also going on tour and three secondary schools hosting two tables each. Locations, dates and times of places to play and the number of pop-up events will be released on South Ribble Borough Council’s social media channels, with plans for the tables to be kept at each venue for as long as possible!

Find out more about the ‘Ping in the Community’ initiative in South Ribble here.