Brilliant weekend of schools table tennis on the cards

The first Butterfly National Schools Individual Championships winners for three years will be crowned this weekend at a major event which will also decide the first schools team national champions since 2020. 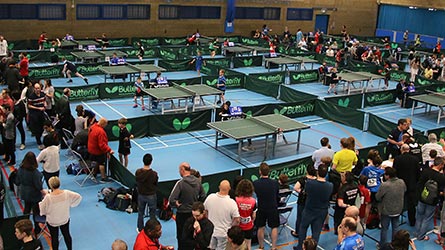 The first Butterfly National Schools Individual Championships winners for three years will be crowned this weekend at a major event which will also decide the first schools team national champions since 2020.

Previously held as two events, the national finals have been combined on to a single weekend which will see eight individuals and eight teams top the podium.

There will be winners in both boys and girls’ categories across four age groups – under-11, under-13, under-16 and under-19 – as hundreds of players compete at the WV Active venue in Wolverhampton.

The weekend starts with the individual competitions on Saturday and the winners will follow a host of big names who have taken the gold medals in previous years, including Olympians Tin-Tin Ho, Kelly Sibley, Liam Pitchford and Paul Drinkhall.

Because of the pandemic, this is the first individual championships since 2019, meaning no defending champions will be present in the same categories.

Among those in the running are the under-10 champions from last July’s Mark Bates Ltd U10-U13 National Championships, Alyssa Nguyen and Teagan Khazal, who are among the leading seeds in the under-11 girls’ and boys’ events respectively. Alyssa is also under-11 national champion.

The under-16 and under-19 competitions all look particularly strong, with a host of members of the England youth squads going for gold.

Click below to see the group stage draws in each competition.

In the team events on Sunday, Two defending champions are among the schools which have made it through the regional finals.

They are the schools which won the under-11 trophies the last time the team finals were held in 2020 – Fox Primary School from Kensington & Chelsea in the girls’ competition and St Edward’s Catholic Primary from Westminster in the boys’.

In addition, Addey & Stanhope School from Lewisham have qualified in the under-16 girls’ category, with three of the four team members having been in the under-13-winning team in 2020.

The full list of qualifying teams is as follows: