Team Bribar completed a dominant victory in the men’s Premier Division, while Market Rasen edged to the title in the women’s top flight as the Veterans’ British League came to a conclusion over the weekend. 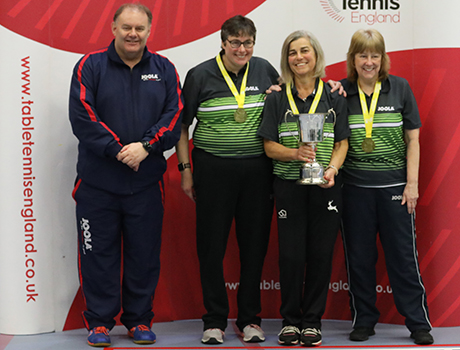 Team Bribar completed a dominant victory in the men’s Premier Division, while Market Rasen edged to the title in the women’s top flight as the Veterans’ British League came to a conclusion over the weekend.

Click here to view photos from the event, taken by Pawel Meryn of Graham Spicer TTC

Market Rasen went into weekend two at Derby Arena with a slender lead on match difference over Knighton Park, with both teams on 9pts.

The eventual champions surrendered the lead in the first round of matches as they drew 3-3 with PPong, while Knighton Park beat Foresters 4-2. Market Rasen had actually come from 2-0 down to lead PPong 3-2 in a match which featured no fewer than five deciding sets, but Denise McEvoy secured a point for PPong by defeating Jane Vickers 11-8 in the fifth.

The following round Knighton Park held 3-3 by Bribar Failand – Teresa Bennett rescuing a point for KP with victory over Janet Adams in the sixth match – while Market Rasen beat Foresters 4-2.

And both the leading teams dropped more points in the next round – Bribar Failand sinking Market Rasen 4-2 and Ellenborough holding Knighton Park to a 3-3 draw.

With neither team seemingly able to take charge of the division, both did win in round 9, KP by a 6-0 margin over PPong and Market Rasen by 4-2 over Ellenborough, to set up a winner-take all showdown in the final round.

Knighton Park held a one-point lead going into the match, but it was Market Rasen who emerged victorious with a 4-2 win. Michelle Reeves gave Knighton Park the lead, but Market Rasen hit back to take the next three. Bennett kept Knighton Park alive by defeating Jane Vickers in match 5, but Lesley Keast sealed the trophy for Rasen as she saw off Karen Smith in four.

That gave Keast a 100% record from her 10 matches, to top the averages, though Ellenborough’s Sara Williams can be mighty proud of a 95% record as she won 19 of her 20 matches.

By contrast, the men’s Premier champions were unassailable, completing the programme with a 100% record and dropping only seven individual matches across the competition.

It was Kevin Dolder’s victory over Haddley which ultimately secure victory for Bribar, who finished a colossal eight points clear of second-placed PPong Vets.

Dolder topped the averages with a 100% record across his 14 matches, while Rogers and Ramage both had 17 wins out of the full complement of 20 matches.

In Women’s Division One, Topspin Fusion took the honours by one point ahead of Waterside Fusion of Ladies

They top two met in the first round on Saturday and it was a 5-1 victory for Topspin as they laid down a marker for the rest of the weekend and went on to finish unbeaten – though they did drop a point when held 3-3 by IPS Tigers in the final round.

Joanne Keighley of IPS Tigers and Mijung Choi of Topspin both had 10 out of 10 at the top of the averages, with Tigers’ Clare Peers and Topspin’s Malgorzata Muda leading the way from those who played 20 matches, both picking up 17 victories.

In men’s Division 1A, Central were the champions with a two-point buffer over The Musketeers. Central won all five matches over the weekend, including the crucial 4-2 victory over their closest rivals in round 9 – a match in which they came from 1-0 and 2-1 down.

That was Musketeers’ first defeat of the series and they were confirmed as runners-up in the final round as they lost 4-2 to Team Ecosse, while Central beat Stocksbridge 5-1.

The top player in the averages was Stewart Crawford of Team Ecosse, with 19/20 for a 95% strike-rate.

The Division 1B champions were Foresters A, remaining unbeaten throughout to head Cippenham by four points.

Foresters did actually win their first eight ties across the two weekends, but were held 3-3 in both of their last two matches, first by Lilleshall and then by Cippenham.

The top three in the averages were all Foresters – Chris Bartram boasting a 100% record over 16 matches, and Ritchie Venner losing just one of his 20.

The Belles won all three matches on Saturday, while Billwood were beaten by Cippenham and drew with Sutton at Hone. It meant Belles had enough of a cushion to withstand a 5-1 defeat by their nearest rivals in round 9 on Sunday.

Sutton’s Angie Bristow had a 100% record, though from only eight matches. Belles’ Karen Henry had the best rate of the regulars, winning 14 out of 19 across the two weekends.

Foresters C were on top of men’s Division 2A, two points clear of London Moberly, though Moberly did inflict a 4-2 defeat on Foresters in round 8.

In the parallel Division 2B, Westfield Nomads took the honours ahead of Draycott III, finishing three points ahead at the top.

This was thanks to a 100% record over the second weekend, culminating in a 4-2 victory over Draycott, a tie in which they were never behind.

Roumen Stefanov was the champions’ lynchpin winning 16 out of 20 for an 80% average, the leading figure of those who played more than eight matches.

Champions in women’s Division Three were Foresters II, who had a healthy five-point margin over their own third team.

The senior team also had club bragging-rights, beating their stable-mates 4-2 in the first round of the weekend, as well as having the top three in the divisional averages, led by Lynne Herrington and Sarah Creasey, who both won 15 out of 16.

Men’s Division 3A fell to the unbeaten Norton Commandos, who won eight and drew two across the whole competition to lead Halton by five points.

Had Halton been able to turn a couple of their five draws into victories, they may have been able to put more pressure on the winners – though in fact the Commandos won the final-round meeting between the two teams 4-2.

In 3B, Joola Plymouth were clear winners, four points ahead of Graham Spicer, though the champions were held 3-3 by their nearest rivals and also dropped points in a 4-2 defeat to PSP Group.

Sycamore Zygabyte Vets were the winners of Division 4A, remaining unbeaten with eight wins and two draws as they won by three points from Topspin Fusion II.

One of those draws was against Topspin, who came from 3-1 down to secure a point.

Sycamore’s Richard Lightowler won 19 of his 20 matches to top the averages on 95%.

There was an identical record for the Division 4B winners, Horsham Spinners, who were also unbeaten with eight victories and two draws. The winning margin was smaller, however, as Newton Abbot were only a point behind and also unbeaten, with seven wins and three draws. The draws included the final-round meeting between the top two – Horsham three times coming from behind to level and ensure it was they who took the title.

Michael George of Spinners won 17 out of 20 to top the averages.

In Division Five, played at Draycott & Long Eaton TTC, it went all the way to the wire and, fittingly, it was Wirepoint Bulldogs who held the edge over Border Reivers on match difference, both sides having finished the nine-team league with seven victories and one draw.

Not surprisingly, the draw was against each other, Reivers coming from 2-0 and 3-1 down to share the spoils as first Peter Aird beat Stephen Green in five and then Geoff Salter saw off Malcolm McEvoy in the same manner.

With Wirepoint having lost only eight individual matches across the two weekends, compared with Reivers’ 12, they took the title – though Salter topped the averages by winning all 12 of his matches.