Team-mates Paul Davison and Michael Andrews are heading for a showdown at the Braintree Table Tennis League individual finals. 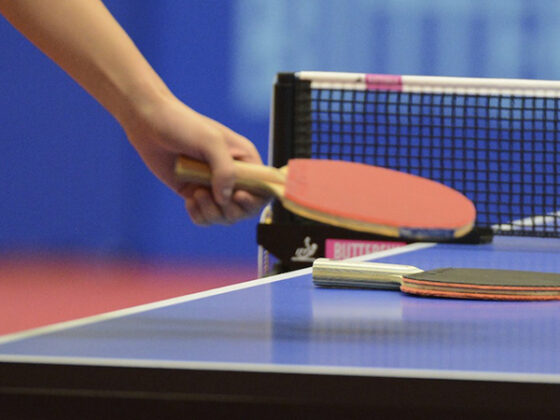 Team-mates Paul Davison and Michael Andrews are heading for a showdown at the Braintree Table Tennis League individual finals.

The Netts A players, the top two seeds after the withdrawal of champion Lee McHugh, face none too easy semi-finals but it would be a major surprise if they did not line up against each other in the men’s singles final at Friday’s finals night, to be held at Netts’ venue, Earls Colne Recreation Club.

Davison had a relatively comfortable passage to the semi final but Andrews’ path was less smooth. He was in danger of defeat in his quarter final against Andy Holmes. He dropped the first and third games and emerged only at 11-8 in the fifth.

Third seed James Hicks fell in the last 16 to Adam Cuthbert, who in turn lost to former champion Terry Dowsett. Dowsett will face Andrews in the semi-final while Davison takes on the unseeded but always dangerous Ken Lewis, who came past Ashley Skeggs in the quarter final.

Davison and Andrews made serene progress to the final of the men’s doubles, where all the action was in the other half.

Lewis and Holmes knocked out the seeded Steve Pennell and Ian Whiteside 11-6 in the fifth before falling to the unfancied Dan Anderson and Takunda Nerutanga.

The Black Notley pair added a further surprise scalp when they overcame Dowsett and Keith Martin in the semi-final, coming from behind to win the fifth game 12-10.

Davison and Lewis will meet each other twice on finals night, having reached the veterans’ singles final, the highlight of which was a five-game win for Lewis over Hicks in the semi-final.

Anderson will face Sean Clift in the final of the restricted singles while Clift’s younger brother Adam lines up in the division two singles against Garry Fryatt.

Skeggs had an excellent run to the division one singles final, beating Whiteside and Anderson on the way. He will meet Pennell, whose semi final victory over Lewis came at 11-8 in the fifth.

The division three final will be between Netts C team-mates Peter Clark and Szczepan Ziobro, who have both returned to the game this season after a lengthy absence.

Davison already has one title on his shelf, the veterans’ doubles, which was decided at the weekend. He and Keith Martin beat Hicks and Graham Playle in the final.

Ziobro won the handicap singles with a win over Anderson in the final while the handicap doubles was won by Peter Game and Chris Krelle, with a final victory over Lewis Armstrong and Matt Stephenson.

Elliot Game retained his junior boys’ singles title with Jack Dearsley runner-up and the two paired up to win the junior doubles, while Tom Verity took the under 11 singles with Ted Papps in second place.