Read about the players who have been selected to represent Team England at the table tennis and para table tennis competition.

The Team England squad of athletes for the table tennis and para table tennis competition at Birmingham 2022 was announced on June 7th.

Click below to find out more about the athletes (in alphabetical order). 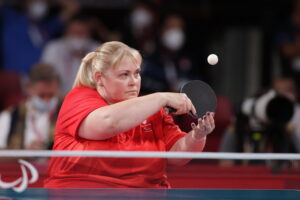 Sue initially started playing table-tennis when she was 12 years old after watching her parents who competed in the local Barnsley and Sheffield leagues. Having also played cricket and netball, at the age of 20 she started playing table tennis in a wheelchair, joining the GB squad in 1996.

She competed in her first European Championships in 1998 and was European champion in 2005, having won silver in 2003 when seven and a half months pregnant.

Sue reverted to her maiden name of Bailey in 2021 and combines her table tennis career with her work as a full-time Primary School Teacher at Shawlands Primary School in Barnsley. 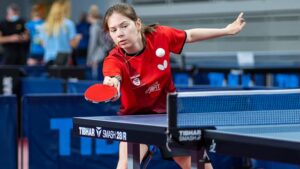 Charlotte made the transition to the Senior England ranks while still a Junior, as part of the squads for the Team World Cup in 2018 and the previous Stage 1 European Championships ties.

The current Under-21 national champion, she was a bronze medallist in the Women’s Singles at the 2022 Mark Bates Ltd National Championships, where she also won a Women’s Doubles silver. 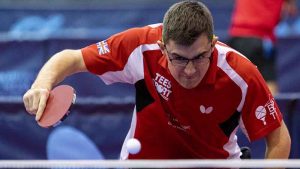 Dan is not only one of the hardest working athletes in the British Para Table Tennis Team Pathway squad but also finds the time to umpire, coach and get involved with grassroots development in the sport that he admits has changed his life. He started playing table tennis at the age of eight at a multi-sport club because the coach had the same disability and spent a lot of time helping him.

Later that year Dan was selected to represent Britain in the European Championships in Sweden, his first major championship, where he reached the quarterfinals of the men’s class 5 team event with Jack Hunter-Spivey. In 2020 at the National Championships he pushed Hunter-Spivey to five sets twice, showing the benefit of competing with his opponent at the Europeans.

In December 2021 Dan secured his first international title in Costa Rica, fighting back from 2-0 down and saving match points to beat the PanAmerican Championship silver medallist Ahad Bakhshaei Sarand 13-11 in the fifth. 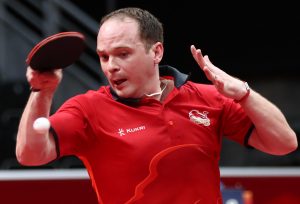 Paul has been at the top level of the game for more than a decade, first coming to prominence as European champion at Junior level and as silver medallist at the World Junior Championships. His achievements made him twice runner-up in the BBC Young Sports Personality of the Year award.

In the senior ranks, Paul became the first English winner of a World Tour event since 1996 when he won the 2014 Spanish Open, and later that year he and wife Jo were on the top step of the mixed doubles podium at the Glasgow Commonwealth Games. Paul ended that year as Russian Open finalist and with a place at the ITTF Grand Finals.

The following year, he was beaten in the bronze medal match at the inaugural European Games, while in 2016 he won the World Team Championships bronze medal alongside Liam Pitchford and Sam Walker.

The trio, with David McBeath and Tom Jarvis also in the squad, then added Team World Cup bronze on home soil in 2018 at the Copper Box Arena on London’s Queen Elizabeth Olympic Park.

He won a second Commonwealth Games gold at the 2018 edition of the Games in Australia, alongside Liam Pitchford in the Men’s Doubles.
In 2019, Paul became the first English player to win two World Tour events, winning the Serbia Open.

At the Qatar Open in March 2020, he and Liam Pitchford became the first English pair to ever reach a World Tour doubles final, losing to No 1 pair Xu Xin and Ma Long.

Paul Drinkhall was elected to the ETTU Athletes’ Commission in 2018. He and Jo have a son, Dougie, and a daughter, Bonnie. 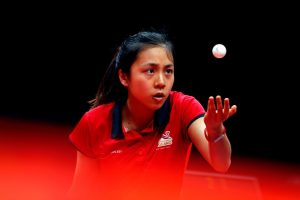 Tin-Tin announced herself as a huge talent when she won the national Under-11, Under-12 and Under-13 singles titles all at the same event in 2007/08.

To say she has gone on to deliver on that talent is something of an under-statement, having won no fewer than 23 singles titles through the age groups – her first Senior of her four to date coming in 2015/16.
Her doubles haul exceeds that, with 24 national titles across Under-14, Cadet, Junior and Senior categories.

On the international scene, Tin-Tin won Commonwealth Games silver in 2014 at the age of 16, alongside Liam Pitchford in the Mixed Doubles. At the 2018 Games, she repeated that feat, again alongside Pitchford, and was also a key part of the team which took a historic first team medal for England, a bronze.

She is a medical student at the University of Nottingham. 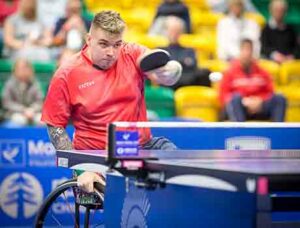 Originally from Liverpool and brought up on a council estate in Anfield, Jack was born with cerebral palsy and was blind and deaf until he was nine months old.

When London won the Olympic and Paralympic bid in 2005, 10-year-old Jack was playing table tennis in a youth club in Widnes and decided that he wanted to play in the Paralympic Games in London. Although he just missed out on selection for London, he experienced the atmosphere of the Games through the Paralympic Inspiration Programme and went on to achieve his dream of representing ParalympicsGB in Rio 2016.

He won his first international singles gold in the US Open in 2017, beating world champion Valentin Baus in the semi-final and London 2012 Paralympic champion Tommy Urhaug in the final.

He lost narrowly to reigning world champion Ali Ozturk in the quarter-finals at the European Championships in 2017 and 2019 and the World Championships in 2018 and, having secured his place in Tokyo by winning the men’s class 5 singles at the World Qualification Tournament, he won his first major championship medal at the Paralympic Games in 2021, taking bronze in the men’s class 5 singles. 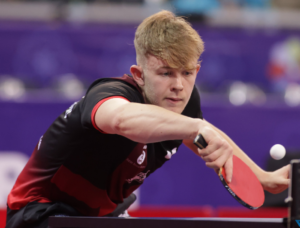 Since winning the Cadet Boys’ Singles at the Spanish Youth Open in 2014, Tom has continued to go from strength to strength.

He travelled to the Rio 2016 Olympics as Team GB reserve and was also part of the support team for Tokyo 2020, travelling as a training partner.

He was part of the squad which won Team World Cup bronze in London in 2018 and he also won a singles bronze and team silver at the Commonwealth Championships in India in 2019.

He reached the final of the WTT Feeder Fremont event in 2022, lifting him to the threshold of the top 100 in the world rankings. 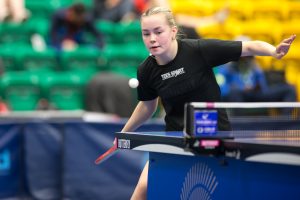 Mollie transitions to the England Senior squad for the first time at these Games, having won representative honours at the European Youth Championships as a Junior.

She was Under-21 silver medallist at the Mark Bates Ltd National Championships in both 2020 and 2022 and was a bronze medallist in the Women’s Singles in 2020. 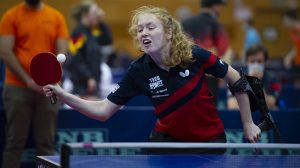 Having been keen on sport from an early age Fliss, who was born with cerebral palsy, started playing table tennis at the age of 14 while volunteering at Hyndburn table tennis club. The coach spotted her natural ability and Fliss had found a sport in which she could excel.

She made her international debut at the Czech Open in 2011 and was selected for the GB Para Table Tennis Team Performance Squad in April 2014. She missed out on qualification for the Paralympic Games in Rio 2016 but made a major breakthrough at the World Championships in 2018, taking bronze in the women’s class 6 singles having earlier in the year represented Team England in the Commonwealth Games.

After taking gold in the Czech Open in 2019 she lost in the quarter-finals at the European Championships to World and Paralympic medallist Stephanie Grebe but went on to medal in Finland and China.

Having again just missed out on qualification for the Paralympic Games in Tokyo, Fliss responded by taking gold in the women’s class 6 singles in the Costa Brava Spanish Open and the French Open in 2021. 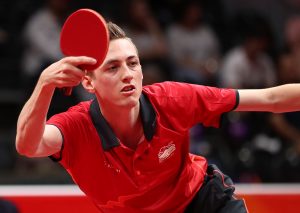 Liam first turned heads on the international stage at the Commonwealth Games in 2010, winning two medals at the age of 17, and he went on to represent Team GB at London 2012 at the age of 19.

Since then, he has gone on to compete at two more Olympic Games, one of only three British players to have achieved that feat, competing in both the singles and team events at Rio 2016 and the singles at Tokyo 2020.

He also represented GB at the inaugural European Games.

Liam was a key part of the England team which won bronze at the World Team Championships in Kuala Lumpur in 2016, alongside Paul Drinkhall and Sam Walker – England’s first medals at the event since 1983.

The trio, with David McBeath and Tom Jarvis also in the squad, added Team World Cup bronze on home soil in 2018 at the Copper Box Arena on London’s Queen Elizabeth Olympic Park.

He reached a career high of No 12 in the world in August 2019 and in March 2020 became the first English player to reach an ITTF Platinum World Tour event final, losing narrowly to world No 1 Fan Zhendong. He and Paul Drinkhall reached the Men’s Doubles final at the same event, losing to China’s Ma Long & Xu Xin. 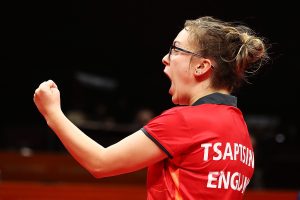 Maria was a key part of the England team which won an historic first Commonwealth Games medal at Gold Coast in 2018, taking team bronze in Australia.

She has won a number of national titles through the age groups, culminating in taking the senior women’s singles title for the first time in 2019. In 2022, she added a second singles title and won the mixed doubles for the first time, alongside Sam Walker, as well as the women’s doubles for the sixth time, alongside Tin-Tin Ho.

An exuberant personality, Maria Tsaptsinos won the TASS Star of the Year award in 2018. 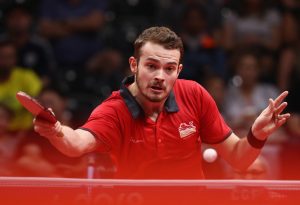 A serial national champion through the age groups, Sam has represented England at Commonwealth, European and world levels, earning a team silver at Glasgow 2014 and as a key member of the World Team Championships bronze medal-winning England Leopards team in 2016. He also represented Team GB in the team table tennis competition at Rio 2016.

Walker was part of the squad which won Team World Cup bronze on home soil in 2018 at the Copper Box Arena on London’s Queen Elizabeth Olympic Park, playing in every match.

In June 2017, Sam reached the last 16 of the men’s doubles at the World Championships alongside David McBeath.

2018 saw him win his second Commonwealth Games medal, a team bronze, and also reach the quarter-finals of the men’s doubles at the European Championships, alongside Tobias Rasmussen of Denmark. He was the first English athlete to reach that stage since Des Douglas and Alan Cooke in 1990. 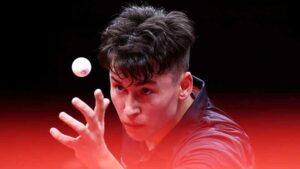 Ross first played table tennis while on holiday at Center Parcs and a watching member of staff, noting the Arsenal shirt he was wearing, christened him the Thierry Henry of table tennis.

His natural skill brought him success in able bodied table tennis and as a junior he was ranked in the top ten in the country, winning two National doubles titles.

However, as he got older it became clear that some physical problem was affecting his development and in 2011 he was diagnosed with multiple epiphyseal dysplasia, which affects the growing ends of the bones.

In April 2018 he won gold in the men’s class 6-10 singles at the Commonwealth Games in Australia and in October 2018 became World champion after beating the double Paralympic champion from China in the final.

He competed in his third Paralympic Games in Tokyo and took bronze in the men’s class 8 team event with Aaron McKibbin and Billy Shilton.