Big day for Pitchford and Drinkhall in Doha 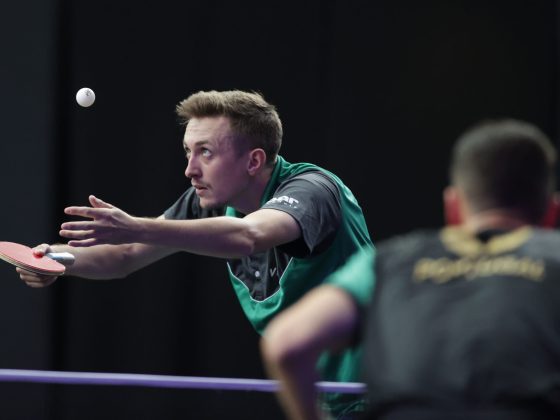 Liam Pitchford and Paul Drinkhall have made it to the men’s doubles final at the WTT Star Contender event in Doha, and Pitchford is hoping to make it into the men’s singles final if he can beat Brazil’s Hugo Calderano.

Pitchford has had a phenomenal tournament so far, dominating his opponents in the singles tournament. His road to the semi-finals has seen two 3-1 victories and a stunning 3-0 win over Hong Kong’s Wong Chun Ting yesterday in the quarters.

Drinkhall couldn’t make it past his first match in the men’s singles, losing 3-2 to Daniel Habesohn but got his revenge when he and Pitchford beat him and his parter Robert Gardos in the double’s quarter-finals.

England’s third representative at the tournament is in contention today, however Tin-Tin Ho’s achievement of reaching the women’s doubles semi-final with her partner Karoline Mischek was quite incredible. The pair successfully beat higher ranked opponents to reach that point, and took part in an epic quarter-finals match against Sarah De Nutte and Barbora Balazova in which they game from two games down to win 3-2.

See below for timings and how to watch:

Liam Pitchford and Paul Drinkhall vs An Jaehyun and Cho Seungmin at 13:30.

This match is on Table 1 and can be watched on the WTT website here.