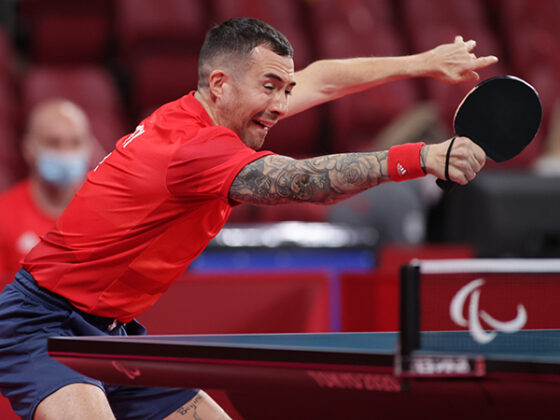 Paralympic champion Will Bayley began the defence of his men’s class 7 singles title in Tokyo this evening with a 3-1 win against 22-year-old Maksym Chudzicki from Poland, the European team bronze medallist who had booked his place in the Paralympics by winning the World Qualification Tournament in June.

You can watch all the action from Tokyo on the Channel 4 website.

Bayley memorably lost his first match in Rio 2016 to the Brazilian Israel Pereira Stroh who he went on to beat in the final and he looked a little edgy in his first match here as he took a close first game 11-9. At 0-3 in the second the Polish coach called a timeout and it worked as Chudzicki came back to take it 11-8 and level at 1-1. Bayley raced through the third 11-3 and used all his experience against his talented young opponent to take the fourth 11-8 and the match 3-1.

“I’m really happy,” said Bayley. “Obviously it has been a massive build-up to the tournament, and I did feel the nerves before my match. Even though this is my fourth Paralympics, I still felt just as nervous because it means so much to me. I’ve trained so hard for this – just like my Polish opponent, who was brilliant. So I’m pleased to get through the match and on to the next one now.

“Experience is massive because I’ve played four tournaments as big as this and I just felt that I had that experience and he was maybe lacking a little bit of that, but he has got the ability so I just tried to use all my experience to get me through.

“I’ve trained probably harder for this competition than for any other Paralympics – I don’t think I could have trained any harder. I’ve prepared unbelievably hard physically for this tournament so I know that if it goes to five sets I’m ready.

“I haven’t played a match for two years and it’s what we train so hard for; we train every day in the hall and we live for these moments to compete for GB so I feel like I’ve played my way in now.

“I was inspired earlier by great performances by Ross (Wilson) and Aaron (McKibbin) and the other GB players who played really well. That gave me a bit of motivation to come here this evening and get the win and that’s what I did so I’m pleased about that.”

On her Paralympic debut, Megan Shackleton took on the two-time Paralympic and world champion Zhou Ying from China but showed little sign of nerves as she took a 5-2 lead in the first game. Although Zhou came back to take the game 11-8 and went on to win the match 3-0 the scoreline did not do justice to Shackleton as she forced the women’s class 4 world No 1 to produce her best.

“Going out there I was really excited to get going,” said the 22-year-old from Todmorden. “Me and Zhou have had some really close matches in the past so I knew I had a chance but I guess that proves why she is such a top player on the world stage and hopefully with a bit of experience those matches can turn into my wins eventually.

“It’s my first Paralympics and I didn’t really know what to expect, if I’m being honest; I didn’t know if I would feel like an intruder but I felt like I belonged which was nice and I really enjoyed getting stuck in and fighting for the points.

“I think going into my next match I know what to expect and I’ll be better prepared than ever. I’ve been working hard in Sheffield and I know that I’ve got it all in the tank and it is just about bringing it out at the right time.”

Shackleton plays her second group match tomorrow against the world No 12 from India Bhavina Hasmukhbhai Patel.