Will Bayley is looking to follow his gold medal in the men’s class 7 singles at the Slovenia Open two weeks ago with victory in the inaugural Montenegro Para Championships in Podgorica this week. 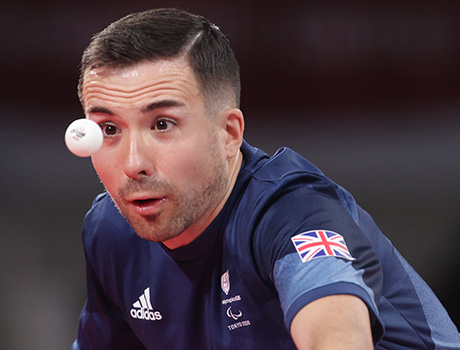 Will Bayley is looking to follow his gold medal in the men’s class 7 singles at the Slovenia Open two weeks ago with victory in the inaugural Montenegro Para Championships in Podgorica this week.

Slovenia was Bayley’s first international tournament since taking silver in Tokyo and he is hoping to continue his good form in Montenegro.

“Slovenia was really important because it was the first tournament of the year for me and it is always nice to win,” he said. “I’ve got that momentum now for the season and hopefully I can keep getting results and keep improving.

“I know I’m playing well and while I’ve still got the opportunity to win gold medals it is important that I take them. I want to win another Paralympics and I want to win tournaments leading up to Paris because winning becomes a habit, so I just want to try and get into the habit of winning tournaments.”

McKibbin, who won his third Paralympic team medal in Tokyo, is also hoping to build on a good performance in Slovenia which brought him a bronze medal in the men’s class 8 singles, losing his semi-final to world No 2 Viktor Didukh from Ukraine.

“I’m happy with how Slovenia went,” said the 30-year-old Londoner who is now based in Epsom. “It was really positive to come away with a singles medal in such a strong competition. I think on reflection my level wasn’t the best, but I’ve definitely improved my base level where I was able to come through some tight matches playing well which is always a positive because it is not normal to be playing your best level every single game, so I take a lot of confidence from that.

“I’m not going to Montenegro with any expectations – I just want to keep playing well and keep doing my best. It is nice to be back on the circuit competing regularly so I’m looking forward to it and excited to play.”

Two-time European team champion Martin Perry produced one of his best-ever singles performances at the Slovenia Open to take bronze in the men’s class 6 singles, pushing the former Paralympic champion and world No 3 Rungroj Thainiyom hard in a four-set semi-final loss.

“I was really happy with my performance in Slovenia,” said Perry, “and the only real negative was that I couldn’t make the final. I feel that I played without any pressure and was able to express myself and that is the way I want to play this week in Montenegro.

“It’s a strong field and that makes me feel more confident because I like that challenge of being the underdog. Mat (coach Mat Kenny) and I had clear communication for every single match in Slovenia and that really helped and I just want to get out there now. It’s somewhere I’ve never been before and it’s new on the circuit so it is exciting but there is a job to do and hopefully I can do that.”

Fellow Welshman Davies was unable to defend his Paralympic title in Tokyo due to injury and will be competing in only his second tournament since winning his fourth consecutive European title in September 2019.