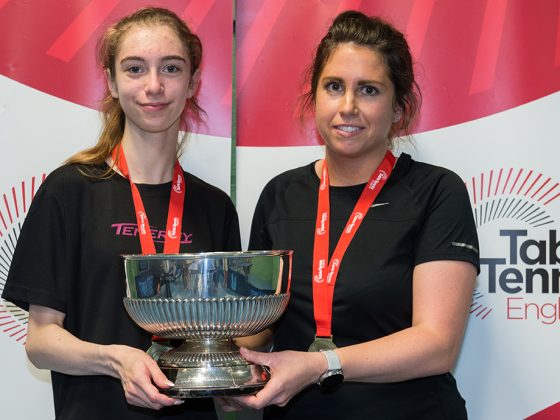 Barnard joined Lauren Charles to seal the JM Rose Bowl for women on Saturday, before teaming up with Eva Eccles to take the Bromfield Trophy for Junior Girls on the Sunday.

The Senior men’s Wilmott Cup went to Stockton, while the Carter Cup for Junior Boys was won by Plymouth.

The competition was held at Draycott & Long Eaton TTC and saw the first ELCC champions crowned since before the pandemic, in 2019.

31 of the 32 finalists played – Stockton had to withdraw from the JM Rose Bowl because of a positive covid test. In total, 107 teams entered the zonal stages from which the finalists qualified.

Leeds beat Wembley & Harrow A 3-1 to take the bronze medal as Simon Noutch claimed a double against Costas Papantoniou and Agnelo Naik and combined with David Thompson to win the doubles. Naik had made it 1-1 by defeating Roman Doryn.

The bronze medal went to Plymouth (Yuki Gresswell, Rachel Trevorrow and Emily Haskell) thanks to a 3-0 victory over Leicester.

Ella Barnard won her second trophy of the weekend as she struck gold with Eva Eccles – the Norwich team defeating Halton in the final.

Derby won the bronze courtesy of a 3-0 victory over Loughborough in the play-off. The winning team was Connie Dumelow and Naomi Coker.

Olly Cornish and Herbie Sage took the cup back to Plymouth, as Cornish made up for a silver medal in the Wilmott Cup the previous day.

Nottingham’s line-up of James Harvey and Fred Jones won the bronze medals by defeating Glossop in the play-off for third and fourth positions.

ELCC Committee Chair and Administrator, Mike Smith, said: “Overall, a great atmosphere and a lot of very competitive matches played in good spirit on behalf of their leagues

“There were many players who shone but player of the weekend must be Ella Barnard who won for Norwich in both the JM Rose Bowl and the Bromfield Trophy followed closely by Olly Cornish of Plymouth with a win in the Carter and runner-up in the Wilmott.

“Many thanks to Draycott and Long Eaton TTC for hosting, to the organising team from the ELCC Committee and to the umpiring team.”