Bardsley through, but brave Tsaptsinos goes out

Charlotte Bardsley went through to the knockout rounds of the Women’s Singles at the Commonwealth Games, but Maria Tsaptsinos went out Meanwhile, the opening matches were held in the para competitions. 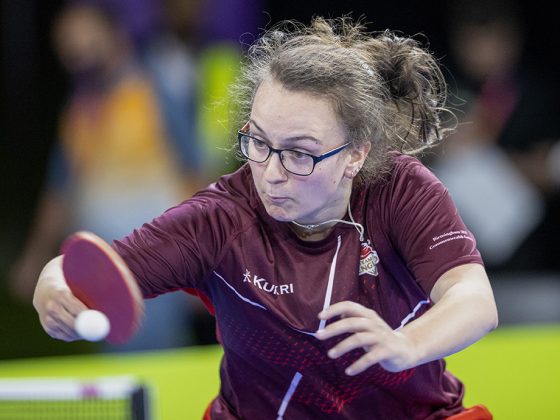 Charlotte Bardsley went through to the knockout rounds of the Women’s Singles at the Commonwealth Games today, but Maria Tsaptsinos went out in a deciding set.

The draw for the last 32 paired Bardsley with Reeth Tennison, the ninth seed from India. Tin-Tin Ho, seeded 12, comes in at that stage of the competition and will face Hannah Silcock of Jersey.

In the Men’s Singles, all three English players were seeded into the knockout stage. The draw for the last 32 has pitted Liam Pitchford (seeded No 2) against Qi Shen Wong of Malaysia, while Paul Drinkhall, seeded six, will play Fahad Khawaja of Pakistan and Sam Walker, the seventh seed, will face Kevin Farley of Barbados. The matches are on Friday.

Bardsley was up against opponents from Trinidad & Tobago and Cyprus, both of whom play in the French league.

She started with a confident display against Rheann Chung from the Caribbean nation and won in four straight, fighting back from deficits in both the third and fourth to complete a 4, 9, 7, 8 victory.

Foteini Meletie of Cyprus was her final group opponent and it would be a winner-take-all clash after Meletie bounced back from 3-1 down to beat Chung 4-3.

Bardsley saved four game points in the first before losing it 12-10, her opponent profiting from a net cord on the fifth game point, but the Englishwoman then turned it around to win the next four and go through to the last 32.

Afterwards, Bardsey said: “I feel so happy right now. I’ve worked really hard for this. I’m really proud to have won my group and get into the main draw at my first Commonwealth Games.

“I know they play in Europe so I knew I couldn’t underestimate them. I did a lot of video analysis before the matches as I knew this was a big chance for me and I wanted to show everyone the level I can play at.”

Bardsley was also boosted by Des Douglas arriving in time to see her match against Meletie. She added: “I didn’t know he was here until the end and I was thinking ‘he’ll definitely be telling me what I should have done differently!’ It’s great he’s here, he’s one of my biggest role models and worked with me for a really long time. I’m really grateful he’s come.”

Tsaptsinos’ first group match against Judith Nangonzi of Uganda was a straightforward win in four (11-2, 11-5, 11-5, 11-3) and she also faced a crunch clash after Malaysia’s Ai Xin Tee, who also defeated Nangonzi in four.

Tsaptsinos showed huge heart and fight to recover from 3-1 down to take it to a decider, but her opponent pulled out an early lead and went on to win 11-4.

Tsaptsinos was visibly upset afterwards – though a hug from athletics legend Denise Lewis and the knowledge that she is still in two doubles competitions will have helped a little.

The England No 2 said: “Obviously, I’m gutted. I wanted to get through my group and prove what I could do in the singles.

“There are a lot of emotions going through my head right now but I’ve just got to re-focus for tomorrow now when I’ve got the doubles and mixed doubles.

“I’ve got to put the work in and go again. It’s a tough one to take but congratulations to her. Malaysia got silver in the team event so I was expecting a difficult match.

“I feel like I left everything out there on the table. Unfortunately, it didn’t go my way in the end but I thought that 3-1 down to 3-3, I did the best I could, but it wasn’t meant to be today.”