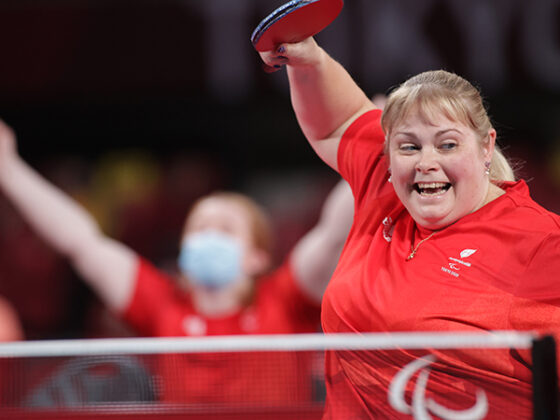 In a morning session at the Tokyo Metropolitan Gymnasium that typified the fighting spirit of the ParalympicsGB table tennis team Sue Bailey and Megan Shackleton secured the fifth medal of these Games for the team – and the first for Bailey at her sixth Paralympics – by reaching the semi-finals of the women’s class 4-5 team.

Unlike the singles tournament, which began with round-robin groups, the team events are knockout rounds from the beginning.

In their quarter-final Bailey, 48, and Shackleton, 22, were drawn against Jordan, represented by the class 5 world No 2 Khetam Abuawad and Faten Elelimat, the women’s class 4 former two-time world team medallist.

Bailey and Shackleton started slowly in the doubles, losing the first game 11-3, but took the second 11-7 to level at 1-1. Jordan led 2-1 after taking the third game 11-8 but the British pair came back again to win the fourth 11-6 and take the match into a deciding game. At 7-4 down coach Neil Robinson called a timeout and Bailey and Shackleton then levelled at 7-7 but a lucky net gave the advantage to Jordan and they secured the game 11-8 and the match 3-2.

In the first singles, class 4 Shackleton took on the women’s class 5 singles bronze medallist Abuawad and recovered from 5-3 down to win the first game 11-9. Abuawad came back to win the second 11-9 but Shackleton kept her focus and established an 8-3 lead in the third. At 8-7 Robinson called timeout and Shackleton responded superbly to take the game 11-7. She quickly went 5-1 up in the fourth and held her nerve brilliantly to take the game 11-7 and the match 3-1.

That left Bailey to play the deciding singles against Elelimat. The pair had met in the semi-finals of the World Qualification Tournament in June when Bailey won 3-0 but when you are playing for a Paralympic medal past form becomes irrelevant.

She had her chances to win the first game but Elelimat edged it 14-12 before Bailey took the second 11-8 to level at 1-1. The world No 18 from Jordan raced through the third 11-2 and looked to have taken control of the match but Bailey is a fighter and came back to take the fourth 11-7.

At 4-1 down the Jordan coach called timeout but Bailey moved to 5-1 with a forehand winner and kept her advantage through the game, taking it 11-5 to win the match 3-2, the quarter-final 2-1 and secure at least a bronze medal for her team.

“It’s a dream come true,” said an understandably emotional Bailey, “and I must admit I thought it would never happen. I thought I’d have to end my career without ever getting that Paralympic medal.

“Megan is an amazing partner. We’ve both had a really tough couple of weeks for various reasons and for Megan to come out and play so well, I’m so proud of her. We haven’t been able to practise our doubles much and I think we played so well. It was just a couple of nets here and there and a couple of shots and it could have been the other way.

“To win a bronze medal the hard way by winning both the singles – honestly I’m so proud of us as a team. We support each other and we know each other so well.

“I’m just so glad I could hold it together in that last game because being the last game it is so much pressure and I was terrified I was going to mess it up and rob Megan of a medal and I would never have forgiven myself.

“I beat her (Elelimat) at the World Qualification Tournament quite easily, but she’s obviously got a lot better since then and that threw me a little bit. Things I’d won points with last time didn’t work so well this time, but it was all about digging deep, taking my time and coming back.”

While Bailey was able to call on her years of experience Tokyo is Shackleton’s first Paralympic Games and in the singles tournament she was unlucky to be drawn in the group that produced the gold and silver medallists in women’s class 4. Although her preparation for these Games was hampered by injury, she showed in her singles that she can compete with the very best at the highest level and she was superb in beating Abuawad, showing a maturity beyond her years and experience.

“Me and Sue had said that regardless of what happens we would support each other and help each other through it,” said Shackleton. “I think we did have a nervy start but I couldn’t have pulled through in the singles if I didn’t know that Sue had my back and I like to think Sue felt the same with her singles too. I just wanted us to come out, give it our all and fight for every point and whatever happened I knew that we would be at peace with the outcome but to get the medal is ridiculous.

“I just wanted to show everyone what I can do. I knew in my singles I could have given it a little bit more and that was disappointing. I didn’t want to leave here thinking I could have done a bit more and I wanted to give it everything for Sue, Neil and the team and obviously for my girlfriend and family and everyone back home. It was just that extra bit of adrenalin I needed to get through it.

“I’ve been watching the Olympics and Paralympics since I was a baby and I just wanted to be here and so to be someone that takes medals is ridiculous. It’s a cliché but it’s a dream come true.”

The experience of Robinson, Paralympic champion in 1992 and the veteran of 10 Paralympic Games, including three as a coach, should not be underestimated.

“My nerves are pretty good right now,” he said afterwards, “but during the game it was a pretty testing environment, to be honest with you. It took all my motivational skills and getting them to do the right things and keeping it simple under pressure, thinking clearly under pressure and they did it. I couldn’t be prouder of them.

“It is Sue’s sixth Paralympics and she’s battled hard. In Rio she was unfortunate not to get a bronze and I know it has been one of the major goals in her career and she has achieved it. She works hard and she also works full time as a teacher but she has found a way to practise and get to a good level and she has just applied herself well here.

“As for Megan, due to injury she has been in a situation she wouldn’t want to find herself but she has applied herself and I’m so proud of that young girl. In her first Paralympics to get a bronze medal, she’s got to take massive credit for this and she’s got a great future.”

Bailey and Shackleton play China in tomorrow’s semi-finals for the chance to go for gold.

“It helps knowing that medal is in the bag,” said Bailey. “We can just go out tomorrow and enjoy it – hopefully play as well as I know we can because they are a really strong team.  We’ll just relax now and get ready for tomorrow.”

Facey Thompson and Stacey both achieved good wins in the men’s class 9 singles but they had a tough opening last 16 match against the Rio 2016 Paralympic silver medallists Spain, represented by the class 9 world and European bronze medallist Juan Perez Gonzalez and the class 10 world No 7 and former world champion Jose Manuel Ruiz Reyes.

The young British pair showed their huge potential as a team with a 3-0 win in the doubles and Stacey then took on the hugely experienced Perez Gonzalez, who had beaten him 3-0 in the European Championships in 2019. The Spaniard took the first 11-6 but Stacey came back to take the second 11-6 and was then edged out 14-12 in the third after which he needed treatment on his right foot from British Para table tennis team physio Morag Sheridan.

With his movement clearly hampered he was 8-2 down in the fourth and seemingly on his way to defeat but the young Welshman is brave as well as talented and he gradually worked his way back into the game and took it 12-10 to level the match. He was always in control in the deciding game and took it 11-6 for a memorable 3-2 win to secure the tie for Great Britain 2-0.

“The problem was more my calf through my disability,” explained Stacey. “Because we haven’t played an accumulative amount of matches with doubles and singles my leg just said no. So I had to find a different way to win because movement is usually my biggest asset and I had to really dig in.

“Mat (coach Mathew Kenny) and Ashley had both told me that heavy spin was a big factor in beating him so I just thought that every opportunity I got to attack I would go with heavy spin rather than power. I could see as it got a lot tighter in the fourth he was going to make those mistakes so the tactics from my team-mate and coach got me over the line in that fourth set.

“This is definitely one of my best wins for the way it happened. I’ve lost to him the last two times I’ve played him so to manage to do it here with the slight issue I did have is definitely a good feeling. Special thanks to Morag for helping me during the game because I don’t think I would have been able to finish it without her and she was a massive help”

“I just want to say I’m proud of our first major match together in doubles and we took a win,” said Facey Thompson. “We’re very good together as a doubles pair – we counteract each other’s flaws on the table. What I’m not good at he is good at and what he is not good at I’m good at, so we do really help each other. My receive wasn’t so great but I know what to do next time and I’m proud of how he came through the singles – mentally he did so well.”

Stacey and Facey Thompson face China in the quarter-finals later today and are relishing the challenge.

“We are dangerous in doubles and they are strong in singles but we are strong as well,” said Facey Thompson.

“We can do anything we put our minds to,” said Stacey. “I don’t think anyone is going to enjoy playing us so I’m looking forward to it.”