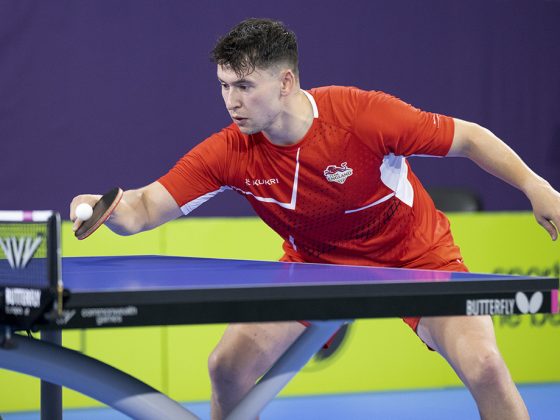 Sue Bailey found her form when it mattered most to reach the semi-finals and keep her dreams of a third Commonwealth Games gold medal alive.

The Barnsley schoolteacher is joined in the last four of their respective para events by Jack Hunter-Spivey, Fliss Pickard and Ross Wilson, but Dan Bullen could not make it a clean sweep despite a brave performance.

Bailey had by her own admission not been in good form in her opening two Women’s Class 3-5 Singles matches yesterday, when one victory from two left her needing to win today.

She dominated her opponent Amanda Jane Tscharke of Australia from the start and looked much more like her usual self as she won 11-2, 11-2, 11-4.

Bailey said: “Yesterday was very frustrating. Obviously, we have had no time on the show court or match courts at all, so to come out for my first match on there, I felt a bit like a rabbit in the headlights.

“But today I felt so much more comfortable and I played so much better. My service, my follow-up, my movement (were all better) – I’m really pleased with how I played.”

Bailey will now face India’s Bhavina Hasmukhbhai Patel in tomorrow’s semi-finals as she aims to add to her gold medals from Manchester 2002 and Melbourne 2006.

In the Men’s Class 8-10 Singles, Wilson (pictured top) endured a difficult day yesterday, getting a walkover in his first match and then losing a tight second.

Today he put in a professional display to get past Asad Hussain Syed of Canada in three straight. He will face his GB colleague and doubles partner Josh Stacey of Wales in the semi-finals.

Wilson said: “I’m not really playing at a level that I’m really happy with at the moment but I’m just going to keep trying to go and improve on what I have just done and see what I can do in the semi-final.

“When you don’t feel fully comfortable sometimes you just have to do what you need to do to get through the match, that was one of those times today.”

I will just keep trying to get on top of that for the match.”

Pickard faced her good friend, doubles partner and GB colleague Grace Williams of Wales, knowing that whoever won would go into the Women’s Class 6-10 Singles semi-finals.

There was a lovely moment at the end when Pickard lifted William’s arm to the crowd in acknowledgement of the quality of match she had played, bring the house down with both sets of supporters.

Pickard said: “Obviously it is always tough playing a team-mate and a very good friend. I feel on the pressure moments, I handled it better on the day. I have got to give credit to Grace, she pulled out a massive performance and played the best table tennis I’ve seen her play.

“The aim was to get through the group and take one step at a time. I’ve done that, now it is about battling hard and getting ready for tomorrow.”

Pickard will now play Qian Yang of Australia for a place in the gold medal match.

Hunter-Spivey was another who had not felt on top of his game yesterday, but he laid down a marker by taking the first game 11-0 against Muhammad Mudassar of Canada.

His opponent improved, but Hunter-Spivey closed it out in three straight with few alarms. In the semi-finals, he will meet Isau Ogunkunle of Nigeria.

Hunter-Spivey said: “I feel great, I think that loss yesterday probably helped me a little bit. A weight has been lifted off my shoulders.

“I’m enjoying playing at the moment so I have got everything to gain now. I’m looking forward to the next match, I’ll prepare well and hopefully, I can do well in the next round.”

In the other group in the same competition, Bullen also needed a win to go through, his opponent Raj Aravindan Alagar of India.

Bullen admitted to nerves about playing on the showcourt, and he made a slow start, losing the first two.

However, he showed what he could do in the third, hitting back to fashion three game points and then staying strong after the first two had been saved.

Unfortunately, he could not keep the momentum going and his opponent took the fourth to book his own place in the last four.

Bullen said: “It has been a big experience for me, playing on a big stage, I need to learn how to deal with my nerves a lot more because I got nervous straight away again when I went out there.

“It took me two games to settle in and then in that last game I almost tried too hard because I wanted to play well. It wasn’t to be. It has given me the motivation to keep going and working hard.”