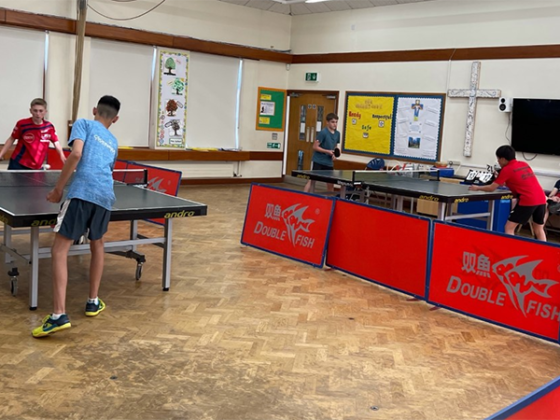 Band 1 had nine players and Band 2 had eight players. It was such a lovely day, that the organiser set up three table tennis tables outside for the kids to practise on when they were not playing, and they were well used.

6 of the 9 players in Band 1 were from Brighton TTC. Top seed, Lewis Austin (Sx) powered though the opposition in Band 1, winning all 8 of his matches. He only conceded 3 games in total. He beat Matt Ley (Bu) 3-1 and just overcame Georgie Hunter (Sx) 11-9 in the 5th game.

Both Matt & Spike Ward (Sx) won 5 matches. Matt, who was the lowest ranked player in the band, finished in 3rd place as he beat Spike. He lost in straight games to a hard-hitting Georgie, but beat Kyle 3-2, beat Elliott & Daniel both 3-1 & beat Spike & Angus Priestley-Tonner (Sx) both 3-0. Spike took out Elliott 14-12 in the 5th, defeated Daniel, Georgie & Kyle all in 4 and the other two in 3.

Interestingly, there were no five-setters in this band, despite there being as many as 28 matches. 18 of these were decided 3-0. Unranked Jamie Miles (Sx) turned out to be miles better than the other band 2 players and won all his matches in straight games to get the gold medal in his first tournament.