Three athletes representing three different nations have been selected for the Performance section of the new GB Junior Squad. 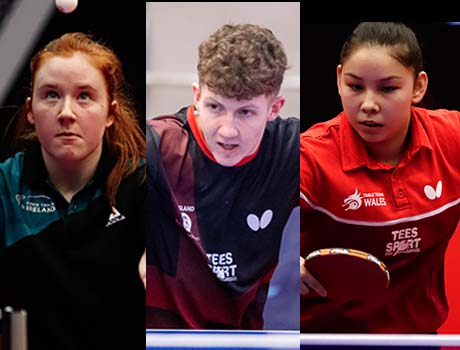 Three athletes representing three different nations have been selected for the Performance section of the new GB Junior Squad.

Ireland’s Sophie Earley, Connor Green of England and Anna Hursey of Wales are the first cohort to be named after a selection process either side of Christmas.

Three English boys – Toby Ellis, Ben Piggott and Kacper Piwowar – have been selected to the Development section of the squad.

Performance players’ programmes are led by the GB staff and supported by Home Nations coaches, whereas the Development players are led by their individual nations, with input and objectives from the GB staff. All have clear goals and will be reviewed regularly to ensure progress and priority for support.

Development players have goals to demonstrate they are on track to getting into the performance tier.

The creation of the squad was made possible with the £1.35 million Progression Funding Award by UK Sport to GB Table Tennis through to the Paris 2024 Olympics.

Two of the main objectives of the investment are:

Players from all the Home Nations were eligible to apply.

GB Performance Director Simon Mills said: “We’re delighted to be able to announce the new squads and look forward to working with the players and coaches to support their progress.

“We’re grateful to UK Sport and the National Lottery for the Progression investment.”

Ryan Jenkins, part of the GB coaching set-up and also Aspire Lead Coach at Table Tennis England, said: “The initial period working with both squads has been fantastic. The players are motivated and working closely with both Alan (Cooke) and myself.

“I have thoroughly enjoyed working with the Home Nations and being able to help many of the players outside the squads with visits to National squads, as well as helping individuals directly.”

Squads are open to future intakes of players and the next assessment weekend will be announced shortly.