Aerobic TT goes up in the world to inspire females

VIDEO: Aerobic Table Tennis has launched in Nepal – with an important aim of getting more women and girls into the sport. 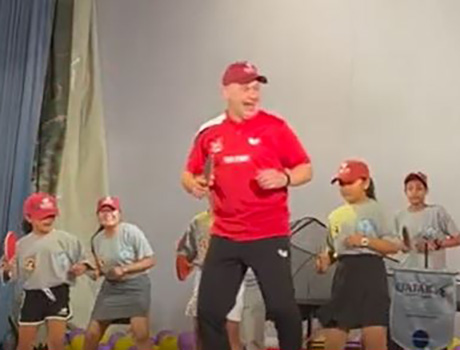 Aerobic Table Tennis has launched in Nepal – with an important aim of getting more women and girls into the sport.

The partnership was first discussed three years ago, but was put on hold during the pandemic. It was finally launched on World Table Tennis Day last month.

Anita is active in trying to get more women and girls to play table tennis and her work has been featured on the ITTF Foundation website.

Aerobic TT was identified as a programme that can engage women and girls and the launch event was held in Kathmandu at the Armed Police Force headquarters, with Anita and her coach Rajendra Bahadur Dulal instrumental in the event happening.

Rajendra obtained sponsorship to stage the event, which was attended by 550 guests including Nepal Tourism board CEO Dhananjay Regmi and Qatar airways CEO Sarik Bogati.

Also present was Himanta Dahal, director of the Himani Trust, which works to enhance the quality of life of the Nepali people.

Virtual video messages were also sent for the event, including a video from the ITTF President, Petra Sorling.

Steve Rowe said, “I have launched Aerobic Table Tennis in many countries, but this was by far the best event ever, anywhere in the world. The attention to detail was exceptional. I would personally like to thank Rajendra for all his help.

“Many guest speakers, spoke about the work that Anita is doing at Anniey’s Ping Pong Club, all being complimentary of such good work, helping children and adults keep fit by using the sport of table tennis.”

The event was ended by a demonstration of Aerobic Table Tennis with the children involved all from Anniey’s Ping Pong Club.

Steve said: “The energy on stage was electric. An amazing end to the event, with the crowd fully involved.”

The trip also included a visit to Bouddha International School, where some of the students took part in an Aerobic Table Tennis session.

You can watch Steve’s film of the trip below.