Para players all in the hunt for semi-finals

All five England para players won one and lost one in the Commonwealth Games group stages today, meaning all are in with a chance of qualifying for the semi-finals. 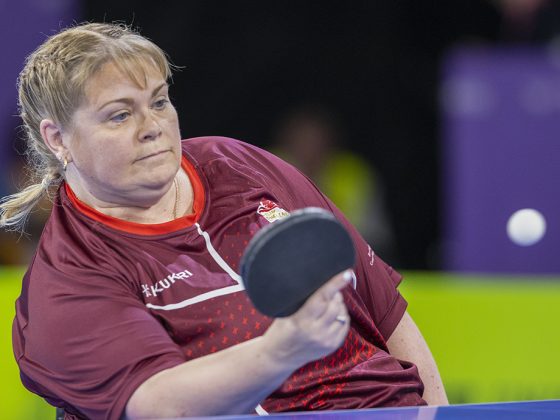 All five England para players won one and lost one in the Commonwealth Games group stages today, meaning all are in with a chance of qualifying for the semi-finals.

Sue Bailey in particular dug deep into her reserves of experience and skill to keep her medal dream alive, despite admitting she was struggling for form.

The 2002 Manchester and 2006 Melbourne champion was defeated in her opening match of the Women’s Class 3-5 Singles by India’s Sonalben Manubhai Patel but bounced back to beat Chinenye Obiora of Nigeria 3-2 in her second match.

Victory tomorrow against Australia’s Amanda Jane Tscharke would see her through to the semi-finals.

Bailey said: “I’m really struggling to get my form and get used to the surroundings quickly. I’m really disappointed with how I’m playing, I know I can play a lot better and I’m just hoping I can improve in the coming days to try and get to the standard that I know I am. I feel like I’m playing about 10 per cent at the minute of what I’m capable of.

Against Patel, Bailey found herself two games behind but rallied to win the third. However, she could not sustain the momentum in the next, though she fought hard and saved four match points.

That result meant she would need to win her two remaining matches to stay in medal contention. She took the first game, but her opponent hit back to win the next two. At 5-6 down in the fourth, it looked bleak, but a timeout seemed to ignite her and she went on a run of points to win the match.

Her forehand was beginning to show itself by now, and she gathered pace from ther on to take the decider 11-3.

In the Women’s Class 6-10 Singles, Fliss Pickard had a routine opening win over Noela Olo of the Solomon Islands and was then beaten comfortably by Li Na Lei, the difference in classification operating in the Australian’s favour.

Pickard goes into tomorrow knowing that whoever wins the match between her and British Para Table Tennis colleague Grace Williams, of Wales, will go into the semi-finals.

She said: “I’m feeling good, feeling sharp. I knew it was going to be an uphill battle going into this event, obviously with the classification difference. I’m here to graft and show what I’m capable of and take each match as it comes and hopefully I can get a result tomorrow.

“My approach is how I approach everything – stick to how I prepare, stick to what I do best and hopefully I can perform like I can.”

In the Men’s Class 8-10 Singles, defending champion Ross Wilson had a walkover in his first match after his Nigerian opponent failed to show up.

His second was against former Paralympic champion Ma Lin of Australia, who is a Class 9, as against Wilson’s Class 8.

Ultimately it came down to fine margins, Wilson showing great fighting qualities in the third in particular as he saved three match points from 10-7 down. He then missed a game point of his own, before Ma Lin took it 11-7, 13-11, 13-11.

He said: “It has been a bit of a tough day, it was disappointing not to play earlier but it was good to get out there and play tonight.

“The game was quite frustrating for me, I missed a lot of opportunities there – I had 9-6 in the second, 11-10 in the third. I know I was 10-7 down but I like how I stayed in there and kept focused on every point to get back. I just didn’t take my chances at all.”

He said missing the first match did not mean he went in cold, adding: “You can’t really blame it on anything, you have to be ready, especially at this level, so I can only really blame myself for that and hope that next time I can do a bit better.”

In the Men’s Class 3-5 Singles, there was an opening victory for top seed Jack Hunter-Spivey in the, beating Junjian Chen of Australia in three straight.

However, he was then frustrated to lose 11-9 in a deciding fifth game to Nasiru Sule of Nigeria.

Hunter-Spivey said: “I enjoyed the experience, feel like I played well. To lose out close in the second match is disappointing, but he played better than me.

“I’ve got to regroup now, get out of my group and get through to the semi-finals and show the level I can play to hopefully bring back a medal.

“I’ve been in these positions before. In the qualification tournament for Tokyo, I lost my first group match and had to win the rest of my matches, so I’m not a stranger to this. I’m ready for the battles and relishing the opportunity.”

In the same category, Dan Bullen was defeated in three straight by Nigeria’s Isau Ogunkunle, finding his opponent’s forehand a particularly potent weapon. Bullen saved one match point in that one.

His next match against George Wyndham of Sierra Leone saw Bullen show great heart. In the first, he recovered from missing three game points to save one from Wyndham and then eventually take his own fifth chance to win it 14-12.

He then bounced back from losing the second game to reassert himself and win the next two.

Bullen said: “First match, I was really nervous, I think the nerves got the better of me. Second match, still not playing at my best but managed to play enough to come through.

“After the first match, I went back (to the hotel) and had a little sleep, trained with Matt (Kenny, coach) for my second match, just got me thinking about where I’m going to place the ball. Being on Court 1, I just got too nervous first set and after I got that first set I just came off the gas a little bit and let him back in.

“Then I carried on just slowly and surely playing my game. More and more of my game’s coming out and hopefully tomorrow my game comes out against the Indian and I can do the business.”