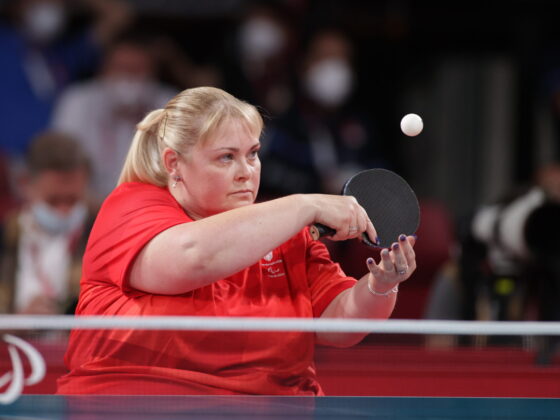 Billy Shilton (men’s class 8) beat the world No 4 on his way to taking silver and on a good day for the British Para Table Tennis Team there were also bronze medals for Fliss Pickard (women’s class 6), Tom Matthews (men’s class 1) and Paul Karabardak (men’s class 6).

Sue Bailey (pictured above) was taken to a deciding fifth set in her first match when Ena Miyazaki from Japan fought back from 2-0 down to level at 2-2 before Bailey secured a 3-2 win, 11-7 in the fifth. She was a comfortable 3-0 winner against Jana Valentova from Slovakia and won her third match against Spomenka Habetinkova Tomic from Czech Republic, the bronze medallist in last year’s Czech Para Open, 3-0.

Bailey secured gold in the round-robin event by winning her final match against the former world & European medallist from Serbia Zorica Popadic 3-1, taking control of the fourth set to secure the win 11-4.

“I had a bit of a slow start yesterday,” said Bailey, “but started playing much better as the day went on and my serves and overall game were much stronger. I served well today and my angle play over the two days was really good. I need to work on my service receive and confidence to transfer the high level that I have in training into matches and be more resilient when I am leading. I’m thrilled to have won gold and this will certainly boost my confidence going into the next tournament.”

Will Bayley won his first match against the former Hungarian Open champion Christian Scheiber from Austria 3-0 but had a tougher match against the German Henrik Meyer before coming through 3-1. He lost only six points in a 3-0 win against debutant Milan Antic from Serbia and as group winner received a bye into the quarter-finals where he beat Daniel Horut from Czech Republic 3-0.

Bayley had to use all his experience and tenacity in the semi-final to recover from 2-0 down against Maksym Chudzicki, fighting back to beat the Tokyo bronze medallist from Poland 11-5 in the fifth. In the final he was always in control against the German Bjoern Schnake and beat the team bronze medallist from Tokyo 3-0 to win his second tournament this year.

“I’m really happy,” said Bayley. “It was a tough match against Chudzicki and he played a really good first two sets but then I changed my tactics and felt that worked and I played brilliantly in the next three sets. I took that into the final against Schnake and Andrew (coach Andrew Rushton) said I was relentless in what I did.  I’m really pleased to win another gold medal with one of my best performances of the season in the final so I’m really proud of that.”

The 22-year-old Welshman was a different player today and took the match 3-0 to take him into a semi-final against Lev Kats from Ukraine. After edging a close first set 14-12 Stacey raced through the second 11-1 and took the third 11-8 to beat the world No 3 3-0.

In the final he faced Ander Cepas in a rematch from the Costa Brava Spanish Open final in March that Stacey won in five sets. The 17-year-old Spaniard, who went on to win gold in the French Para Open, is improving all the time and took the first set but Stacey stepped up his level and took the next three sets for a 3-1 win.

“It’s fantastic to win the tournament,” said Stacey. “I think I played very well, I feel I was very solid and managed to take the opportunities given to me. I normally find Koyo’s style quite difficult to play but Mat (coach Mat Kenny) and I had some conversations in the corner and I think it showed in the scoreline.

“Against Kats I feel that again I took my opportunities and took control of the match early in the second set and I gained a lot of confidence from that. The first set of the final wasn’t too good and I made a lot of unforced errors but I had a good conversation with Mat and he suggested serving topspin a bit more to his backhand to get into the rally where I was stronger than him and it worked really well. I’m really glad to have won gold and it puts me in a good position going into the Commonwealth Games and the World Championships.”

Billy Shilton began with a comfortable 3-0 win against Alejandro Diaz from Spain and was then edged out 11-9 in the fifth by the former world No 2 and multi-world and European team medallist Gyula Zborai from Hungary, having led 2-0. Shilton won his final group match against 15-year-old Borna Zohil from Croatia 3-1 which took him through to the last 16 where a 3-0 win against Steffen Salomonsen from Norway, the former European Para Your Games silver medallist earned him a quarter-final match against Tokyo bronze medallist Maksym Nikolenko from Ukraine.

He played a superb match to beat the world No 4 3-1 and followed that with a hard-fought 3-2 win against the Rio 2016 silver medallist and former world No 2 Andras Csonka from Hungary.

In the final Shilton faced the world No 1 from Ukraine Viktor Didukh and he pushed the five-time European champion and Tokyo silver medallist all the way, losing the first two sets 18-16 and 13-11 and winning the third 11-8 before Didukh clinched the gold 11-7 in the fourth.

“Losing to Zborai was unexpected for me as I felt I was playing well,” said Shilton, “but he played a really good match so coming back from that yesterday to play Nikolenko in the quarterfinals today was really difficult. I’m really pleased that I won that match as it was probably my best career win so far and I managed to take that form into the semi-final and win against Csonka. He was playing a really good level so I was very happy that I could come through that match in the fifth.

“Didukh was too strong today although I had my chances – I was up in the first set and the second set and I won the third so I had good chances. Overall I’m really happy and it is one step closer to qualifying for the World Championships so I’m pleased with my performance.”

Fliss Pickard started with a 3-0 win against Emelie Endre from Sweden, bronze medallist in last year’s French Para Open. She had to work hard in her second match against 20-year-old Morgen Caillaud from France, surviving a fightback by the world No 8 before taking the deciding set 11-6 for a 3-2 win, and won her final match against Eirini Drakonaki from Greece 3-0 to finish top of her group.

She could not find her best form in the semi-final against Cajsa Stadler and from 2-0 down fought back with typical determination to level at 2-2 having edged a tight third set 12-10. But the 18-year-old from Sweden, who lost to Pickard in Slovenia last month, was not to be denied and took the deciding set 11-9 for a 3-2 win.

“I’m disappointed with the result and the way I played in the semi-final,” said Pickard, “but Stadler is playing well and has improved a lot so fair play to her. I am struggling to allow myself to play the way I am capable of and it’s something I am going to look at when I get home. I have played a lot of tournaments all of which I can learn from and I’m very proud of the way I am reacting in defeat.”

Tom Matthews was a 3-0 winner against Marian Kamien from Slovakia, bronze medallist in last year’s Paralympic World Qualification Tournament, and followed that with a 3-0 win against the European bronze medallist from Switzerland Sylvio Keller. That ensured he finished top of his group and he received a bye into the semi-finals where he faced the Korean Kim Hakjin, gold medallist in the French Para Open in 2021. Matthews took the first set but the Korean then took control of the match and was a 3-1 winner.

“I feel I played well especially in the group stages,” said Matthews. “I started well in the semi-final but took my foot off the gas a little and failed to impose my game. But I’ve learnt a lot here and I feel I’ll be ready for the World Championships in November.”

Competing in only his second tournament since winning his fourth consecutive European singles title in 2019, and his first this year, Rob Davies started well with a 3-1 win against the in-form Alan Papirer from France, gold medallist in both the Egypt Para Open and Al-Watani Para Championships this season. He lost his second match 3-0 to Timo Natunen from Finland, who took silver in the Paralympic World Qualification Tournament last year but progressed to the quarterfinals where his lack of match practice told against Kim Hakjin. Davies had chances to win the first set but the Korean edged it 14-12 and took the next two 11-8 for a 3-0 win.

In his first tournament since Tokyo Paul Karabardak started with a 3-1 win against Michael Azulay, the former European team medallist from Sweden and followed that with a 3-1 win against Valentin Kneuss from Switzerland. The Welshman finished top of his group after a 3-1 win against Takuro Chihara from Japan and in the quarterfinal he recovered from losing the first set to beat 21-year-old Haris Eminovic from Bosnia-Herzegovina 3-1, 13-11 in the fourth. In the semi-final he faced Raimondo Alecci, competing in his first tournament since taking silver in the Costa Brava Spanish Open in 2020. Karabardak twice fought back to level at 1-1 and 2-2 but the Italian just edged the deciding set 12-10.

“I’m quite pleased overall as it was my first tournament for 10 months,” said Karabardak. “I was not quite at my best but I was pleased with the way I played and battled through to the semi-finals. I tried my best in the semi but Alecci was playing very well and it just wasn’t to be today although I had my chances. There is still a lot to be pleased about and I can build on this for my next tournament in Argentina and the World Championships.”

Martin Perry came through a tough opening match 3-2 against Benedikt Muller, the European team bronze medallist from Germany who took gold in the Al-Watani Para Championships in Jordan last month. The Scot lost 3-1 to European team bronze medallist Esteban Herrault from France but progressed to the knockout stages after a 3-0 win against the silver medallist in the Al-Watani Para Championships Eleftherios Mavris from Greece. In the quarter-final he came up against Alecci and after taking the first set 11-3 the Italian took the next two 12-10 for a 3-0 win.