Karen Tonge MBE has been appointed as table tennis and para table tennis referee for the 2022 Birmingham Commonwealth Games and will lead a strong and diverse group of English officials. 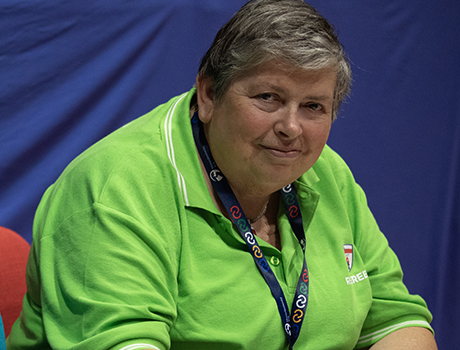 Karen Tonge MBE has been appointed as table tennis and para table tennis referee for the 2022 Birmingham Commonwealth Games and will lead a strong and diverse group of English officials.

A vastly experienced referee, Karen (pictured above) was Competition Manager the last time the Commonwealth Games were held in England, in Manchester in 2002.

Alongside Karen, 18 English umpires will officiate at the Games, joining another 18 from around the Commonwealth.

Among the English umpires to have been selected are:

Chris Newton, who has been co-ordinating the umpire training and selection process for Table Tennis England, said: “This is for sure our most diverse umpiring team at a major games.

“Table Tennis England has been working very closely with the Technical Officials’ Committee over the past three years getting this team qualified to the correct standard and then offering them sufficient ongoing CPD support to be ready and competent to deliver at the Games.

“I would like to thank all those established umpires and referees who have given their time to support our new batch of umpires on this journey and I look forward to seeing them perform in Birmingham this summer.”

The full list of English officials is as follows:

All the selected officials will be officiating at the Mark Bates Ltd Senior National Championships at the end of March – click here to buy tickets.

Ticket sales have been going well for Birmingham 2022 but there are tickets currently available for most Table Tennis sessions. They start at just £8 for under 16s and £22 for adults. Find out more at birmingham2022.com