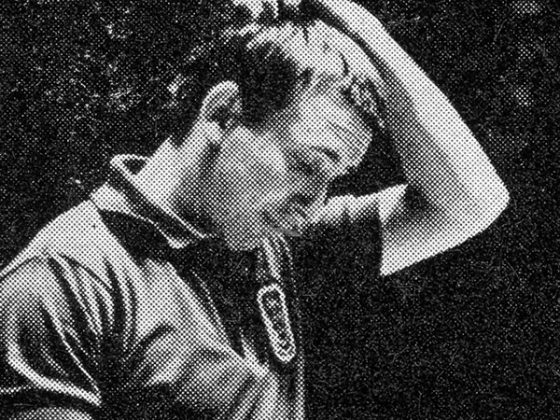 A heart of gold, a loyal friend and a player who delighted in leading officials a merry dance but always with a twinkle in his eye: former England international, Connie Warren, died on October 12th aged 81.

Connie, or Cornelius Joseph to give him his full name, was first spotted by Harry Venner in 1955 and was soon playing at Wimbledon YMCA. Deciding he wanted to be the best he could, Connie put in hours of practice and the following year he had advanced enough to gain a junior cap for Surrey and one year on a county second team place.

In all he played for Surrey for 18 years and over 50 matches before retiring in 1973/74 but was called out of retirement a couple of seasons later and was still playing at veteran level for more than another 10 years.

Connie had some success at junior tournaments and this continued as he moved up to senior level where his tremendous loop and attacking game earned him an England place and a debut against Sweden in Stockholm on February 23rd, 1966.

Regarded as one of the most astute thinkers and tacticians of the game, Connie’s ability to work out his opponents’ strengths and weaknesses was one of his greatest assets. He was one of the great characters on the tournament circuit in the 1960s and 70s, his wit was as fast as his forehand which on occasions led to clashes with authority which resulted in him not being selected for England as often as his ability warranted.

Nevertheless, Connie played in a number of international matches and was a member of the European Championships team at Wembley in 1966 with Chester Barnes, Ian Harrison, Dennis Neale and Brian Wright, which finished sixth, and with Barnes, Harrison, Judy Williams and Mary Wright won the Quadrangular Tournament against Ireland, Scotland and Wales in February 1967.  He also played in the World Championships in Stockholm in 1967 and in the East German Open.

On the home front, Connie’s best result was winning the Welsh Open in 1967, beating the England No 1 Chester Barnes in the final. Just prior to this in the National Championships he reached the Men’s Singles final, losing to Ian Harrison having beaten Dennis Neale and Brian Wright in earlier rounds. He also reached the semi-final stage in the National Championships on three other occasions.

Connie won a number of tournaments in the UK during the 1960s and early 1970s before retiring. His highest ranking in England was No 3 behind world-class players Chester Barnes and Denis Neale. Connie was certainly one of England’s best and most exciting players of his era.

As a coach he set up, with his wife Joan, the famous Larkhall Table Tennis Centre in South London which became the practice centre for many international, county and club players.

Connie had suffered from Parkinson’s Disease for several years but this didn’t stop him attending many of the Veterans tournaments both at home and abroad. His spirit remained undiminished, being cared for devotedly by his long-time partner, Diane Pearce. Our sincere condolences go to Di and all family and friends.

Donations in his memory can be made to Parkinson’s UK by clicking here.