Hastings, Sussex and England lost one of their most senior and respected members when Colin Hyland passed away on Saturday, 26th March 2022 in his home town of Hastings where he was born on 24th May 1934. 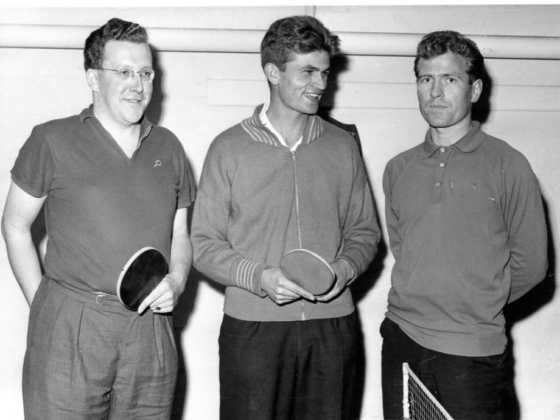 Hastings, Sussex and England lost one of their most senior and respected members when Colin Hyland passed away on Saturday, 26th March 2022 in his home town of Hastings where he was born on 24th May 1934.

Colin had a tremendous influence on the organisation and development of table tennis in Hastings and Sussex as well as being one of the counties top players in his earlier days.

At local level Colin held many senior positions on the Hastings & District Table Tennis Association – President 1983-84 and 1990-91, Chairman 1976-98, Treasurer 1960-68, General Secretary 1967-76. He was made a Vice-President in 1992. That, however, barely covers the surface of his involvement which included the Dordrecht sports exchange from the 1960s onwards, participating in matches representing the town with perhaps the most memorable one between Hastings and the Province of Normandy held on 24th April 1966 to mark the 900th anniversary of the Battle of Hastings. It is not recorded who won that battle! Colin, also, was the organiser of many tournaments within the town.

On the playing front Colin was a one club player, playing for NALGO and with his team won the Division 1 League championships on many occasions as well as holding the Hastings Closed Men’s Singles and Doubles titles.

Sussex County benefited from Colin’s knowledge and wisdom in the numerous posts he held from Chairman 1984-92, Deputy Chairman 1981-84, Treasurer 1973-84, also having been on the Coaching Committee and Appeals/Disciplinary Committee as well as its Honorary Auditor and Umpires Secretary. He was made a Vice-President and later an Honorary Life Member in 2001. Colin’s expertise at organising led him to run the Sussex Open for ten years from 1976, one of the most popular and prestigious Opens in the country.

Colin’s most memorable experience was umpiring, with Mick Strode, the Men’s Team final in the European Championships in Gothenburg in April 1990. The match was Sweden (Jan-Ove Waldner and Mikael Appelgren) against Germany (Jorg Rosskopf, Stefan Fetzner and Georg Bohm) and you can’t get much better than that.

In recognition of his achievements Colin was awarded the ETTA Merit Award in 1986 and an ETTA Vice-President in 2000. In 1988 Colin received the Hastings Sports Council Elka Hillier Shield for services to local table tennis.

Colin was still very interested in all that went on even when he wasn’t quite so active and attended as many local events as he was able, a familiar and welcome presence at the Hastings Closed.

On a personal note, I remember how welcoming Colin was to me when I moved to Hastings in 1975 when I joined the NALGO TTC, we used to play in a former nuclear bomb shelter! I had the pleasure

and privilege to play with Colin in South East NALGO tournaments and so for over 40 years have appreciated his knowledge, guidance and wisdom as well as enjoying his company and welcoming his sage advice. An unassuming man but one whose influence and presence has left its mark on many people. We will miss him.

From Dave Watters, Chairman of Hastings & DTTA: As Chairman of the Hastings and District Table Tennis Association I would like to say how saddened we all were to hear that Colin had passed away. His influence and commitment to Hastings Table Tennis was an example to us all, holding all the key offices on the Executive Committee over many years. Colin was an excellent player and sportsman and liked nothing better than to encourage all players to achieve their potential.

I have known Colin since 1976 when I moved to Hastings and started playing league Table Tennis, and I have enjoyed a few games against him, usually (if not always) with me coming second!

On behalf of the H&DTTA Colin will be greatly missed, and we would all like to extend our sympathy to his wife and family.

The funeral will be held at Hollington, Church in the Wood at 2.00pm on Thursday 21 April 2022 and you are very welcome to attend. Following the service, the family would also like to invite you to Horntye Park Sport Complex for refreshments and to share your memories of Colin. To assist with catering, it would helpful to have some idea of numbers and therefore if you are likely to attend Horntye Park please can you let Paul know by text on 07887992083 or email [email protected].