This week’s Centenary Stories takes as its focus one of the photos in our Centenary Book, English Table Tennis at 100: A Century in Photographs. 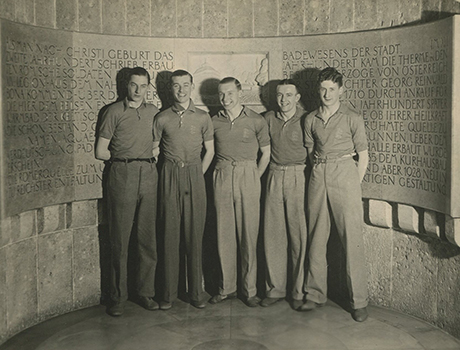 This week’s Centenary Stories takes as its focus one of the photos in our Centenary Book, English Table Tennis at 100: A Century in Photographs.

The photo in question is of the England squad at the World Championships in Baden in 1933, which comes from the Gunther Angenendt Collection.

The team, which won a bronze medal, includes in its number Andrew Millar. One of members, Bill Fawley from the Liverpool & District League, wrote to us with his memories of Andrew, who was known as Andy.

Bill wrote: “I joined Manchester YMCA in 1947 or 1948 (I remember the annual subscription was one guinea) having previously been a member at the junior YMCA. Apart from National Service January 1949 to June 1950, I played table tennis for the YM until I gave up serious play at the end of the 1952/3 season.

“We won the league title in the 1952/3 season, also, I think, the Richardson Cup. Our team was Ron Alcock, Arthur Holland, Andy Millar, Jack Clayton and myself.

“The reason for the letter is, of course, Andy Millar, who I was proud to call a team-mate. I found him extremely charming and refreshingly modest. Andy played twice in the Swaythling Cup for England in the early 1930s and on one of those occasions won a bronze medal. At that time, I think he was the youngest player to represent England.

“When we played together he obviously wasn’t the player he had been but he was still good enough to be in the YM first team! I’m not sure if he was one of those who had played pre-war and was still unhappy about the net being lowered!

“I should also mention my friend and former team-mate Jack Clayton, who continued to play long after I had ‘packed in’. Jack won the veterans’ title at, I think, the 1969 English Open.”

Bill may have stopped playing, but his involvement in the sport was rekindled in the 1980s when he was a building contractor and was approached by Don Davies, who among other prominent roles in the north west was Chairman of the Liverpool & District League, and asked if he would sponsor the league’s closed championship.

In a great illustration of how the different eras of our sport are linked together, Bill still sponsors the competition and this week was presenting the prizes at the tournament’s Finals Night.

We have also heard from Ken Eliot on the subject of the longest game played, in response to our feature on Mike Westoby a few weeks ago.

Mike played in the English Closed Championships in March 1963 and in the third round won a game 38-36 against John Martin, which was billed as a world record by Table Tennis News.

However, Ken is aware of a game which beats that – albeit at a lower level. It came in the Gainsborough & District League only a month or so before the English Closed, in the match between Bob Shelley and Mick Parr. As the scorecard below shows, the third game of their match went all the way to 41-39.

Ken wrote: “The feat was copied and published in a souvenir handbook, commemorating the Golden Jubilee of the Gainsborough and District Table Tennis League back in 1987/88. I believe that the winner has sadly passed on, but the loser is 78 and worked with me at the local power station.”