It’s a Key milestone for club in Bath cup

It was a special occasion at St John’s School in Bath on Monday when, unusually, two teams from the same club contested the final of the Bath & District Table Tennis League Restricted Cup competition. 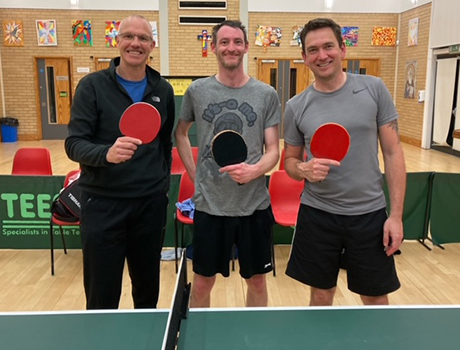 It was a special occasion at St John’s School in Bath on Monday when, unusually, two teams from the same club contested the final of the Bath & District Table Tennis League Restricted Cup competition.

The teams from the Methodist Key Centre Club in Keynsham, who both compete in Division One of the League, had exceeded expectations to reach the final – the club not having won the cup for 14 years.

Both A and B teams battled hard in the semi-finals to get through to the final as both were underdogs. The B Team beat Bear Flat B, while the A team beat Division One’s runaway champions Chippenham B. It was the fourth time the teams had met this season, with two losses and a draw for Key Centre before this.

Despite a brave effort by the B team it was perhaps fitting that it was the A team who came away with the trophy with a convincing 5-0 win. The trophies will be presented at the Annual Presentation Evening in June.

The Key Centre club was formed about 50 years ago and has been a fixture of the Bath League ever since. With the loss of the Fry’s club from Keynsham it is now the only Keynsham-based club in the Bath League, running three teams.

Keynsham is proving to be an exciting centre of table tennis thanks to a regular session for social players and budding League players hosted by Mark Tanner at the Fear Hall every Thursday evening. Mark’s sessions are a useful source of new talent for the Key Centre club with several players, mainly teenagers, already introduced to competitive League play. For further information about these sessions contact Mark at [email protected]