England’s dream of gold was snatched away by Singapore at the semi-final stage of the Commonwealth Games team event this evening. 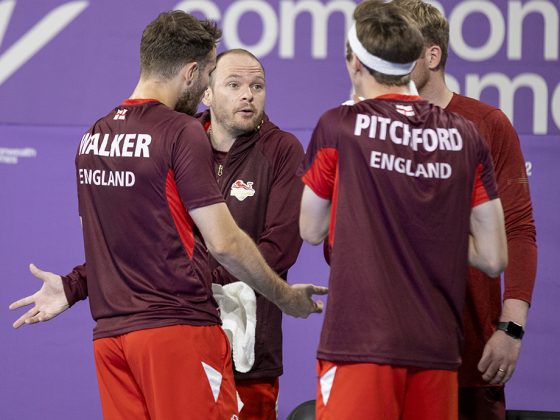 England’s dream of gold was snatched away by Singapore at the semi-final stage of the Commonwealth Games team event this evening.

It was a 3-2 defeat for the No 1 seeds, despite a double victory for Paul Drinkhall. The opening doubles was lost and there were singles defeats for both Liam Pitchford and, in the decider, Sam Walker.

So it will be bronze at best for England and they will step out at 11am tomorrow, against Nigeria, to try to achieve what would be a repeat of their Gold Coast performance four years ago.

Game one was tight, most points being won and lost in the short game with an average rally length of three shots and a longest of just six.

It went back and forth to 9-9, when the Singapore pair took two in a row to get first blood, left-hander Pang pouncing on a Walker serve to send a game-winning return speeding back past the server.

The Singapore pair extended their advantage in the second, pulling away from 7-7 to 11-7 after another tight opening few points.

The theme of few expansive rallies endured through the third and England took their timeout at 1-4 down and staring at an opening defeat.

When the play did develop into open attack, England had the better of those exchanges, so it was in the Asian duo’s pair to keep it tight. They did so enough to open a 10-5 lead and, via a timeout at 10-7, put the first point on the board when Pitchford netted in the next rally.

Paul Drinkhall led off the singles against Zhe Yu Clarence Chew, immediately setting down a marker by powering the first serve back past Chew for a clean winner.

Power became the operative word of the game and Paul had too much of it, his forehand in particular rasping past a helpless Chew on several occasions.

He opened up a 10-6 lead and, after seeing two game points elude him, composed himself at the towel break and duly won it on the next, forcing Chew wide with a swinging shot to the forehand and finding the empty table as his opponent lost his footing in stretching for the return.

It all looked to be going to plan in the next as Drinkhall stayed in front most of the way and was well placed at 9-7. But his radar went slightly awry as Chew won the next four points to level it up.

The pivotal third was won in a purple patch by Drinkhall, advancing from 3-3 to 10-3 in a blitz of positive strokeplay. He took it 11-4 when Chew netted.

Chew would have sensed an opening at 6-2 up in the fourth, and he probably still did when he took a timeout after Drinkhall clawed back to 6-5. At 10-9, the door was definitely open, but Drinkhall shoved it closed and then gestured for some help from the crowd.

They replied in spades and twice more roared their approval – when Chew clipped the net and went long to present Drinkhall with a match point and again a few seconds later when the Singaporean found the net.

In losing the first 11-7 to Pang, Pitchford was not quite firing, but he found his spark at 0-4 down in the second, hitting the front at 6-5 as his backhand clicked into groove. He never lost the lead in taking the game 11-9.

The third saw Pang again on top, taking seven out of nine points from 3-3 to bring up five game points. In the event, the fourth was the one that mattered.

Pang was now in the mood and Pitchford tried everything to haul himself back into the contest, only to find this opponent more and more resembling a brick wall as ball after ball came back.

10-5 down was somewhat more than a minor crisis, but Pitchford found some of his best form of the match to win the next four. Sadly, there was to be no miracle escape, a clip of the net taking the ball long and putting Singapore into the lead once more.

Drinkhall’s three-set win over Quek was pretty routine, Drinkhall ruthlessly efficient in exposing his young 16-year-old opponent’s weaknesses. In truth, it felt like the calm before the storm.

That storm was blowing in Singapore’s favour in the first, which Chew took 11-6 against Walker, who was playing his first singles match of the tournament.

It was 11-5 to Chew in the second and England were staring at the bronze medal match, rather than going for the gold they so crave.

And then the wind changed. Walker romped out to a 9-2 lead in the third, enough of a buffer to seal it 11-7 and keep England alive.

At 4-1 down in the fourth, it began to look a little like a false dawn. The timeout was taken, coach Gavin Evans imparting words of wisdom and encouragement. A point apiece later and it was Singapore’s turn for the timeout.

A back edge at 4-7 did not help Walker’s cause, and Chew eked out another point to stand two from victory and a place in the final. Walker, fighting, clawed two back but then clipped the net to go long.

Four match points, and there was no coming back as Chew won it at the second attempt, falling to the floor as his team-mates jumped on to court.

Singapore men will now aim to make it a golden double in their final against India (who beat Nigeria 3-0 in the other semi) after their women beat Malaysia 3-0 in the final earlier today. Australia beat Wales by the same margin in the bronze medal match.

Afterwards, the England players were brutally honest about their performance.

Pitchford said: “They played well. They probably wanted it more than us. I haven’t been feeling great recently. Today it showed that I was under a bit of pressure, I just wasn’t there mentally.

“Obviously we tried some different doubles players but at the end of the day we should’ve won the singles afterwards. There shouldn’t be any problem if we change the order.”

Drinkhall’s view was similarly candid, saying: “We said before the match we need to get to three and that’s all it is. It’s a team match. We win and we lose together. Unfortunately today we lost. They were better. That’s the simple thing.

“I don’t mean that they wanted it more but they handled their emotions a bit better. Possibly us being the number one seed we let them attack us a bit too much, rather than us trying to get in front and take the game to them. Whoever they play in the final, if they play like that, they have a very good chance.”

Walker added: “They probably just played with a little bit more freedom than we did. I think we were at times probably stiff and not quite as free as them. They were able to play their game rather than us playing ours, probably with the exception of Paul. We weren’t able to enforce our game on them.

“Of course I would’ve liked to have had a previous match but that can’t always be the case. I still fully expected myself to go out there and play on my level, which for the first two sets I didn’t do. It was a long way back from there.

“Hopefully we’ll come back tomorrow and deliver a better performance.”