Charlotte Bardsley kept an ice-cool head and took England into the quarter-finals of the Commonwealth Games women’s team event in Birmingham today. 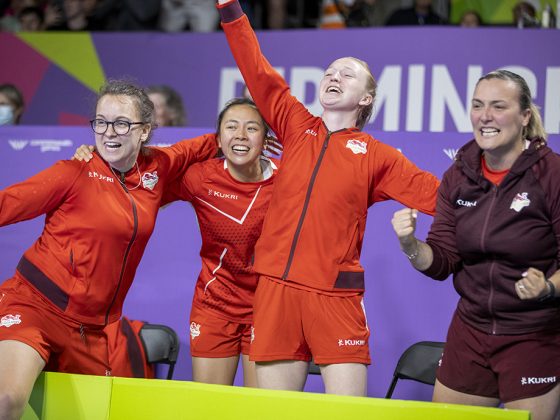 Charlotte Bardsley kept an ice-cool head and took England into the quarter-finals of the Commonwealth Games women’s team event in Birmingham today.

England defeated Nigeria 3-2 in a dramatic three-hour match in which they led 2-0, got pegged back to 2-2 and then won it 11-9 in the deciding game of the deciding match.

They now face Wales in the quarter-finals at 6.30pm today.

With so much riding on the match, a positive start in the doubles could be key and it was a nerveless opening from Maria Tsaptsinos & Charlotte Bardsley as they turned in a performance of intelligence and composure against Fatima Bello & Offiong Edem.

Right from the opening rallies, they were never behind, taking the opening game 11-6 as Tsaptsinos finished it with a blistering forehand flick – something of a feature of the match.

The second was 11-8, Nigeria saving the first of three game points as Tsaptsinos went diving full length in vain to try to intercept a swinging forehand by Edem. She quickly picked herself up and put in an unreturnable serve to seal the game.

The third saw the only moments of uncertainty for England as a Nigerian timeout at 0-2 sparked a revival to 4-2. England went on a run of their own and led 9-6, but Nigeria refused to buckle and brought up a game point at 10-9.

Tsaptsinos whipped up the crowd as England saved that one, but they had to save another at 10-11. England brought up a match point, saved by a Nigerian edge . . . but there was no denying the hosts on their second opportunity as Nigeria netted a return of serve.

A win for Tin-Tin Ho against Ajoke Ojomu, world-ranked No 278, would reinforce the advantage, and the English No 1 started well with an 11-4 game.

Ojomu worked her way back into the contest in the second, though Ho always had the edge and built a 10-7 lead.

The first two game points were saved, but Ho forced a mistake with a super backhand block, Ajoke’s attempted return going long. Ho’s scream of delight could be heard even above the roar of approval from the NEC crowd.

The only moment of minor crisis was in the third when a Nigerian timeout helped turn a 6-4 deficit into a 7-6 lead. But Ojomu did not win another point, Ho completing a focused performance as the Nigerian clipped the net and went long in the first match-point rally.

Tsaptsinos edged England closer, taking the first game of the third match 11-4 as opponent Odem, ranked 10-5 in the world, netted a serve on game point.

Odem hit back in the second, leading throughout and, after Tsaptsinos had clawed back from 9-5 down to 9-9, winning the next two points and clinching the game with a super forehand flick.

Odem took the third as well, taking the third of her game points with a crunching forehand to take a 13-11 game which was highlighted by an amazing rally at 8-7, Tsaptsinos somehow lunging forward to reach an Odem back edge, driving the crowd wild as she celebrated winning the point a few shots later.

The fourth also went to deuce, Tsaptsinos saving two match points at 8-10. She must have thought she had won the next rally about three times, forcing Edem wider and wider, only for the ball to come back each time. Tsaptsinos’ missed forehand brought up a third match point and this time Edem took the chance.

And so back to Ho, up against world No 57 Bello. Each player had a run of five points from 3-3 in the first game, Ho clawing back an 8-3 deficit to 8-8 – but it was Bello who took the next three, with the aid of an edge at 8-8 and a hefty forehand on game point.

Another Bello run of five looked to have broken the back of game two as she went from 4-2 down to 7-4 up and then stayed in front to 10-8. Four points later, the crowd was rocking as Ho stormed back to take it 12-10 and level the match.

And 11-6 third game, Ho starting to dictate more consistently, put England one game away from the quarters.

It was never likely to be that simple and three successive points from 8-8 but Bello back on level terms as she took the fourth.

In the decider, there was never more than a point in it until the change of ends at 5-4 to the Nigerian. When she won the next two points, England took their timeout. It didn’t change anything and three more points gave Bello six match points. She needed only one as Ho’s return of serve went long.

When Bardsley lost the first game 11-6 to Ojomu, it appeared to be slipping away from England. But Bardsley is not one to lose her head and she calmly went about levelling up 11-7 in the second.

Similarly, when she faced a 4-1 deficit in the third, she continued going about her business and went on a run of six points in succession. That broke the back of the game and meant she had enough in hand to take it 11-8 despite missing three game points.

The fourth rather escaped from Bardsley, however, Ojomu showing impeccable control to take it 11-3 and set up a one-set showdown for the quarter-final spot.

The first point of the fifth game saw Ojumu miss the ball on her serve – a freebie gratefully accepted. There were no others on offer though as it remained tense and tight throughout. Bardsley held a 5-4 lead at the turn-around and remained just in front – 7-5 . . . 8-6 . . . 9-7 and then – sharp intake of breath – 9-9.

A long return gave Bardsley match point and then the roof came off as Ojumu sent a shot long and wide.

Afterwards, Bardsley said: “I didn’t feel anything, not nervous. I was just playing. I was like, ‘It’s my serve, I know what I need to do – just do it and then whatever happens, happens’.

“I wasn’t thinking about the pressure, I was just in the moment.”

In the same arena earlier, Wales beat Canada 3-2 to go into the quarter-finals as group winners – and set up that England tie.

By comparison, the England men’s final match against Bangladesh, which started on the next court while the women were still fighting it out, was the expected stroll with three 3-0 victories.

England go through as group winners and the quarter-final has paired them with Cyprus at midday on Sunday, with the winners to meet Singapore or Canada in the semi-finals.