Aldridge and Cochrane battle to titles 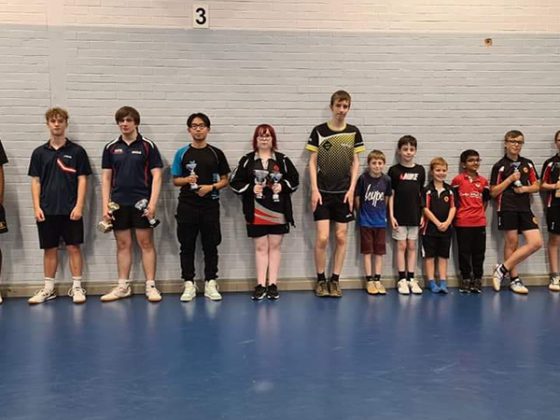 The traditional curtain-raiser to the table tennis season in Northamptonshire took place earlier this month at the Westfield Table Tennis Club in Wellingborough when 18 young athletes gathered to compete in the 2021-22 Northants County Junior, Cadet and Girls Invitation Tournament.

As well as being the curtain-raiser to the season, this was the first County event that allowed parents in to watch since the Covid regulations were lifted which meant for many of the parents it was the first time they had ever seen their child play any competitive table tennis.

The cadet event for those under 15 had nine players competing including last season’s runner-up Ben Aldridge who had been narrowly defeated 3-2 (12-10 in the decider) in the 2020-21 tournament by Ansh Shah. Shah is now too old for this age group so could not defend the title that he had won in such a thrilling final last time round.

The nine players were put into one group of five and one group of four and they would play everyone in their group before having a play-off match versus the person who finished in the identical position in the other group. The top two in each group would play a semi-final followed by a 3rd/4th place play-off and a final.

Whereas Group A was fairly clear-cut, Group B was a much tighter affair. This group featured 2nd seed Arthur Warburton alongside Adam Koszyk, Fabian Squires, Bart Koszyk and Luke Pettitt.

The first two matches in Group B were one-sided matches with the more experienced players easily coming out on top but matches three and four both produced tremendous battles. Warburton found himself staring down the barrels of an unexpected defeat when he trailed Pettitt by two games to one but just about managed to turn the match around to complete a 3-2 victory (16-18, 11-8, 9-11, 11-7, 11-9).

From that point on all the matches were more clear-cut and went with the seeding until the final match of the group between Warburton and Adam Koszyk which Koszyk took 3-0 to top the group and relegate Warburton into second place, with both players going forward into a semi-final match.

Koszyk continued his good form in the semi-final with a 3-1 win against Gopal to book his place in the final but the other semi-final between the top seeds produced another tremendous tussle. Warburton took the first game only for Aldridge to hit back and ease 2-1 ahead before Warburton claimed game four to level things up and force the decider. At this point Aldridge then hit his best form to claim the win with a 3-2 (9-11, 11-4, 11-7, 8-11, 11-3) victory.

The final saw some fantastic rallies as both Aldridge and Koszyk displayed their blossoming skills. Third seed Koszyk took the first game 11-7 and another upset was on the cards. But Aldridge was having none of it and was not to be denied for the second year on trot, bouncing back to take the next three games 11-2, 11-5. 11-5 to claim a well-deserved championship title.

The Junior event consisted of nine players, including the one solitary female player who had accepted the invitation to play. Group A consisted of top seed and two-time champion Alex Cochrane, Vincent Pham, Mia Solomon, Rushabh Patel and Caspian Wagner.

Second seed and last season’s runner-up Virgil Birch-Annan was in group B alongside last season’s Cadet winner Ansh Shah, Lucas Turnbull-Stubbs and Pranav Sathya. The format used for the Junior event was the same as the one used for the Cadet event.

In Group A, all the matches went with the seeding with the closest match being the penultimate match between Wagner and Patel. The higher ranked Wagner looked to be control as he cruised into a 2-0 lead (11-8, 11-1) before Patel fought back with two narrow games (9-11, 11-13) to force a decider. At this point, Wagner just about recovered his composure to claim the decider 11-6 for a 3-2 win.

Cochrane and Pham both went into the final match of the group unbeaten and knowing that their place in the semi-final was assured. When Pham took the first game it looked like a shock might be on the cards, but Cochrane stepped up a gear to claim a 3-1 (7-11, 11-8, 11-4, 11-6) victory to top the group.

Of the six matches played in Group B, two of them went all the way to a decider and both featured Shah. First up was his match against Turnbull-Stubbs with Shah claiming the spoils 6-11, 11-4, 4-11, 14-12, 11-7.  Shah’s next match also went to the deciding game and again he prevailed with an 11-7, 9-11, 11-8, 7-11, 11-3 win over Sathya. Going into the final match both Shah and Birch-Annan were undefeated, but the second seed proved one step too far for Shah and he duly topped the group following his 3-1 victory.

At the semi-final stage, Cochrane eased through 3-0 against Shah and with Pham defeating Birch-Annan 3-1 in the other semi-final, this meant that Pham and Cochrane would have a rematch for the Championship following their meeting in the group stages. Would Cochrane taste victory again? Or would Pham upset the odds and take the title? In their earlier match he had chances to take a 2-0 lead before eventually succumbing 3-1 so the result was not a straightforward call!

Pham comprehensively took the first game 11-6 to take early control of the final. Cochrane responded with an 11-5 game of his own to level the match at 1-1. Pham wasn’t put off by this set-back and took game three 11-8 to move into a 2-1 lead. Was the pressure getting to the top seed? If it was then it didn’t show as Cochrane blitzed through the fourth game 11-2 to level the match again and set-up a fifth game shootout. The decider saw Pham race into a 4-1 lead and at the change of ends he held a 5-2 advantage.

Coming into the final stages of the match, Pham still held a two-point advantage at 7-5 ahead and the upset was well and truly on the cards. Two unreturned serves later and Cochrane had tied the match up at 7-7 before taking the next point to lead for the first time in the match and the tide had finally turned. Three quick points later and top-seed had completed an 11-7 game to win 3-2 to become a three-time Northants County Junior Champion.

Huge congratulations and respect must go to the plucky Pham who for so long looked like he would pick up the upset win.

Birch-Annan defeated Shah 3-0 in the 3rd/4th place playoff match, Wagner came out on top in his match with Turnbull-Stubbs for 5th/6th place with Sathya claiming 7th after taking a narrow 3-2 win over 8th placed Patel.

Sadly, the girls’ event could not be run as there was just one entrant so Mia Solomon retained the title she had won for the first time last season.