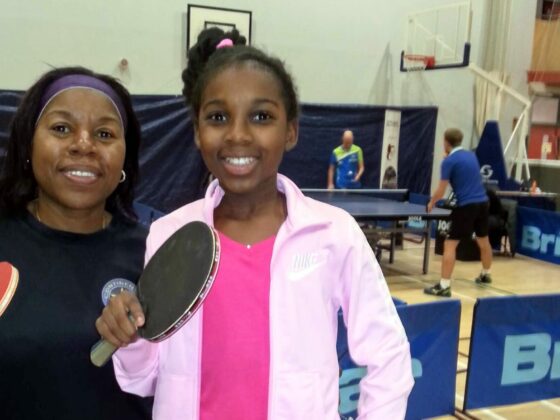 This week’s focus for our Return to the Table campaign is juniors in table tennis where we’re highlighting confidence, passion and motivation for youngsters! One of the areas we are showcasing is our Women & Girls Ambassadors, and today’s story is that of Vienna-Leigh Clarke who became an Ambassador last year at just 11 years old.

Vienna began playing table tennis at just seven years old, encouraged by her mum who she regards as her role model.

She quickly fell in love with the game, having fond memories of playing at Christmas time on the dining table with family, and now plays at Continental Stars in Perry Barr, Birmingham.

One of the key things Vienna attributes to her love of the game is all the people that have encouraged her along the way, from her mum to coaches, and other members at her club. So much so that she was encouraged to become a Women and Girls Ambassador for table tennis in England!

We asked Vienna why she wanted to become an ambassador:

“I was asked to become a female ambassador by my coach’s wife who also plays.  She says we need more females out there especially from ethnic backgrounds so my mum encouraged me to participate.

I notice everywhere I played when I’m with my mum that it was always 99% men and boys, so I think it is a good thing to let people know there’s a lot more females out there that would like to play if given the opportunity!”

“My goal is to become a better player, fitter and making lots of new friends.  I enjoy playing TT and one day I’d like to think I can become a professional player if the earnings are good!

The more I practicse the more I surprise myself how much better I get.  It is also nice that my coach sees potential in me including my mum who is happy to support me through my table tennis journey.”

She also has some advice for other young girls:

“I would advise any females wanting to get involved in table tennis to give it a chance and try it out.  I don’t think if I attended at TT sessions with my mum, I wouldn’t have thought about TT because my school does not include that sport in PE.”

If Vienna’s story has inspired you to get involved with future Women & Girls opportunities in table tennis then register your interest here by filling out this short form.