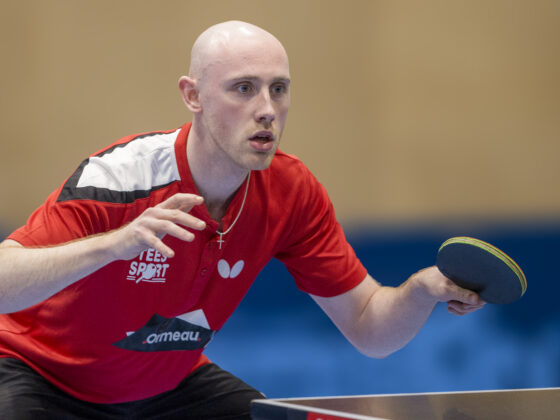 Ormeau are in control of the battle for second place of the SBL Premier Division thanks to a 6-1 victory against North Ayrshire on Saturday. The Northern Irish side were impressive but didn’t have it all their own way in a tie that was closer than the overwhelming score line would suggest.

Both North Aryshire and Ormeau made it into the top half of the Premier Division after each picking up three wins throughout the season. As Ormesby were out of reach at the top of the table, thanks to their unbeaten record of five wins during the regular season, this fixture was always going to be crucial in the race to second.

The home trio of Matt Ware, Oriol Monzo and Zak Wilson won the decisive moments throughout to ensure they are highly likely to finish behind Ormesby.

In front of a crowd containing travelling support Ware opened the tie against Colin Dalgleish. Dalgleish looked set to get the away side off to a strong start but Ware come back from two down to eventually win in five.

Wilson then stepped up to beat Sean Doherty in three before the doubles. That was another tight match as Ware combined with Monzo to take on a Doherty/Dalgleish pairing. The lead went back and forth before Ware/Monzo clinched the fifth 11-6 and gave Ormeau a 3-0 lead.

Monzo was straight back in action in the singles facing Martin Johnson playing his first tie of the day. The first two sets were shared before the Ormeau man pulled away, eventually winning 3-1. Ware continued his fine afternoon as he beat Doherty in three before Dalgleish was involved in another five set affair. He once again took the first two but Monzo fought back to win the final three 11-9, 11-8, 11-7 and the game.

Martin Johnson ensured North Ayrshire got a point on the board as he beat Zak Wilson in four, the players shaking hands with the final score 6-1 to Ormeau.

There are just two rounds remaining in the SBL Premier Division top division with Ormesby set to  host Ormeau on 7th May as the North-East side look to continue their unbeaten season. BATTS will play Fusion as the lower tier also enters its final two rounds.

You can find more stats, fixtures and league tables at British TT Leagues.