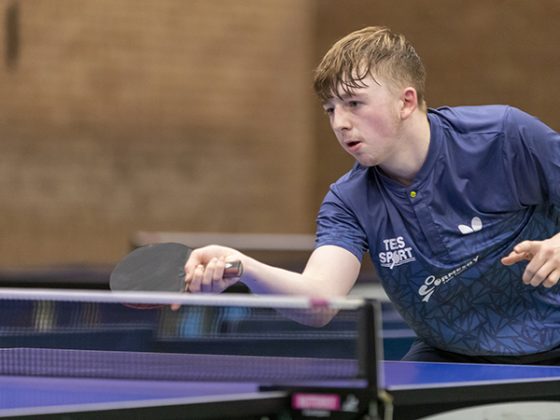 The Tees Active Cleveland Junior 4 Star Table Tennis Championship took place at Thornaby Pavilion over the weekend, with Ormesby boys dominating the Junior Boys’ Singles, whilst Draycott were the most successful in the team events, winning three of the four events.

Ormesby players dominated the Junior Boys’ Singles with Josh Weatherby beating Tom Rayner 3-1 in the final. Weatherby came through the bottom half of the draw by beating David Gofton in the semi-final and had earlier beaten Jie Fu Tham from Yorkshire, the sixth seed, 11-8 in the fifth, whilst Gofton had beaten Nahom Goitom of Surrey by 3-1 in the quarter-final.

In the top half, Rayner had good wins against Daniel Jones from Staffordshire and the top seed Naphong Boonyaprapa from Nottingham.

The winner of the Junior Girls’ Singles was Megan Jones, the second seed from Shropshire, who won the final in straight games against unseeded Rachael Iles from Buckinghamshire. Jones reached the final by beating unseeded Saskia Key from Kent and Helena Dicken from Derbyshire.

In the top half, Iles came through with wins against Mabel Shute from Essex and Sienna Jetha from Hertfordshire, Jetha having defeated the top seed Erin Green 11-9 in the fifth in the quarter-final.

The U17 Boys’ Singles was won by James Hamblett who beat Naphong Boonyaprapa 3-1 in the final. Hamblett, the second seed, beat Daniel Jones by 3-1 in the semi-final whilst Boonyaprapa defeated Wales’ Harri Docherty in straight games in his semi-final.

In the U17 Girls’ Singles event, Anna Green was the winner, beating Saskia Key 3-1 in the final. Key had wins over Bethany Ellis and Darcey Taylor, and in the semi-final beat Megan Jones 11-6 in the decider to reach the final.

Anna Green beat Ella Pashley comfortably in the semi-final after Pashley had beaten Sienna Jetha by 3-1 in the quarter-finals.

The Cadet Boys’ Singles was won by Joseph Dennison, the fourth seed from Lancashire, who beat Yannis Kazantidis the third seed from Essex in straight games in the final and unseeded Harry Randall from Berkshire in the semi-final. Kazantidis defeated Ralph Pattison, the top seed, 11-3 in the fifth in his semi-final.

The Cadet Girls’ Singles was won by Rachael Iles from Buckinghamshire who beat Sienna Jetha 11-8 in the fifth game in the final. The two players in the final had met in the group where Jetha had won on that occasion.

Iles beat Bethany Ellis in the 2nd round and third seed Connie Dumelow of Derbyshire in the semi-final.

The U13 Boys’ Singles was won by top seed Abraham Sellado of Yorkshire who beat Adam Alibhai of Essex by 3-1 in the final. Alibhai defeated second seed Max Radiven in the semi-final.

In the U13 Girls’ Singles event, Sienna Jetha was a comfortable winner from the top seeded position, beating Eva Eccles of Norfolk 3-0 in the final and Brooke Morris of Lancashire in the semi-final.

The Junior Boys’ Team event was won by top seeds Formby, consisting of Rhys Davies and Naphong Boonyaprapa. Formby beat Urban in the final after overcoming Greenhouse A in the semi-final by 3-2. The Greenhouse team of Nahom Goitom of Surrey and Aaron Yuk Shing Geung of Middlesex enjoyed a good win over the third seeds Ormesby B of Josh Weatherby and Tom Rayner in the quarter-finals.

In the bottom half of the draw, Urban came through to reach the final after a win against Grantham by 3-0 in the semi-final.

The Junior Girls’ Team title was won by Draycott with a team of Erin Green, Megan Jones and Anna Green. They beat Cippenham in the final by 3-0 and Ormesby in the semi-final by 3-1 after Ella Pashley had defeated Erin Green in the first set.

The Cadet Boys’ Team event was won by Draycott, Joseph Cooper and Frederick Jones, who beat Kingfisher’s Harry Randall and Max Radiven by 3-0 in the final.

Draycott’s toughest match was against Grantham College in the semi-finals. Grantham College’s Joseph Dennison won both his singles, but Joseph Cooper beat Abraham Sellado in the decider.

In a three-way play-off in the Cadet Girls’ Team event, Draycott A won the title with a 3-1 win over London Academy and 3-0 over their own B Team.

Draycott A were represented by Naomi Coker and Bethany Ellis. London Academy’s players were Sienna Jetha and Alisha Dutta, with Sienna Jetha winning one singles set against Naomi Coker.