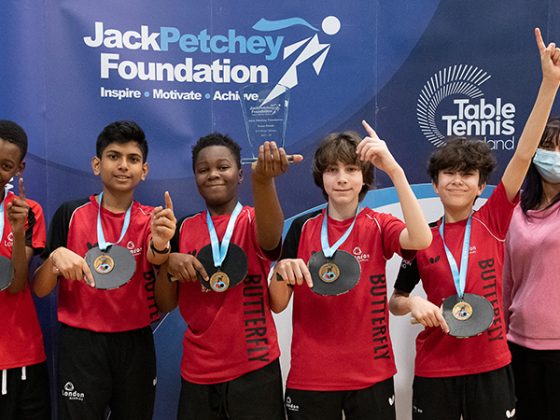 After a two-year wait, the Jack Petchey London Schools Table Tennis Finals were back – and eight team titles were decided on a thrilling day at the University of East London’s Sportsdock.

London Academy took three titles and there were some desperately close matches, including one medal won by a margin of just two points.

The event also serves as a zonal final for the Butterfly National Schools Championships, with the top two teams in each category going through to the regional finals.

A full selection of pictures from the event, by Stephen Pover, can be viewed on our Flickr page.

The day’s first champions were Wallington High School for Girls, who won the round-robin event without dropping a match.

Sisters Yuvathi and Anishka Kumar teamed up to defeat University College School, Tiffin School for Girls and Morpeth School all by 5-0 margins. There were some anxious moments, including when 13-year-old Anishka defeated Morpeth’s Jennifer Chiesurin 12-10 in the fifth.

Morpeth took second place courtesy of 5-0 victories over UCS and Tiffin, and Tiffin were third having seen off UCS 5-0.

Yuvathi Kumar, 19, said: “We went into it open-minded and trying our best in every match, and it feels really great to have won. It was a really friendly competition – everyone was really friendly, all the staff and the other players.”

The semi-final had seen UCS come through a thriller against Whitgift, drawing 4-4 but shading the countback 16-15 to reach the final – thanks to Leo Sassoon coming from 2-0 down to win the decisive eight match 3-2 against Keefer Kungsen. Third place went to Wallington School.

Robert, part of the under-16 winning team two years ago, said: “It feels good and I’m proud we’ve won another age group. Two years ago was a nice win and it’s good to come through covid times, improve and win a higher age bracket.”

The round-robin event was won by St George’s, but only just as it came down to countback between them and Addey and Stanhope. The teams drew 4-4 and won all their other matches, meaning it came down to the head-to-head clash, and St George’s took it 13-12.

Jonabel said: “I thought if we worked together and fought hard, we could win. We had each other’s backs and our coach (Dan Basterfield) helped – without him, I don’t think we could have made it.”

Third place and the bronze medals went to Tiffin School.

Wallington beat Ernest Bevin in the final, taking an unbeatable 5-0 lead, but the biggest drama was in the third-place play-off, which finished in a 4-4 draw between Morpeth and Fortismere.

The two teams could not be separated on games either, as it was all square at 14-14. It went down to points and Morpeth got the verdict by just two to take the bronze.

Sai said: “We get through every year, so there’s an expectation on us, but we’re up for the challenge. We’re all friends so it definitely helps supporting each other.”

London Academy were never behind in the final, but Putney did twice peg them back, to 1-1 and 2-2, before three London victories in a row saw them build an unassailable lead, Dutta winning the crucial seventh match to put her team 5-2 ahead.

Sienna Jetha said: “We all supported each other through the whole time and never let each other down. We were quite confident and we started well, but it got harder towards the end and we were a bit nervous – but we got the result we wanted.”

The third-place play-off was another thriller, as Addey and Stanhope edged out Coloma Convent School 14 games to 13, the match having finished 4-4 as and winners came from 2-0 and 4-2 down.

London Academy sealed their hat-trick in the final match of the day as they beat UCS 5-3, Jayden Matthews winning the crucial final tie.

Jayden said: “Our expectation was to win and we won. It was down to teamwork and thanks to everyone who was cheering me on in the last match.”

Fox Primary were the champions, winning all three matches to hold on to the title they also won two years ago.

Putney High were in second place, defeating London Academy 5-3 and drawing 4-4 against James the Great, who ended in third place thanks to a 4-4 draw against London Academy.

Evie said: “It feels nice to win. At the start we had nerves that we weren’t going to do it because we thought there were going to be hard players to play, who were better than us, but we made it through.”

St Edward’s Catholic Primary School were the champions two years ago and they defended their title at the first opportunity, and in fine style as they won all four matches 8-0.

Second place went to Brandlehow and third to Fulham Bilingual, the latter edging out St Aubyn’s 5-3 in the match which effectively decided the bronze medals.

The winning line-up was Teagan Khazal – who was also part of the winning squad two years ago – Zaid Aldilimi, Ikram Shah and Parsia Ahsani.

Parsia said: “I feel very happy and excited to win. At the start, I felt we could win but I was stressed because we didn’t know how the other teams played. But our coaches Marcel (Surdu) and Philipp (Snell) really helped.”