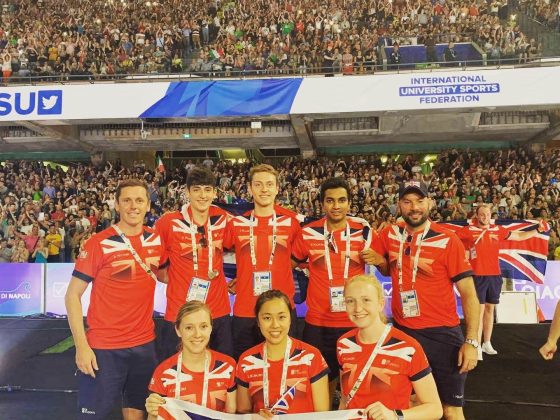 Table tennis athletes who are students are being offered the chance to experience the ‘phenomenal’ feeling of pulling on a Great Britain kit for the 2022 edition of the World University Games.

The Games, postponed from this year because of the pandemic will be held in Chengdu, China, from June 26 and July 7 next year.

With more than 10,000 athletes from 150 countries, the Games are the largest multi-sport event for student-athletes and broadcast to 300 million viewers in 100 countries.

It is something England internationals Maria Tsaptsinos and Emily Bolton can recommend, having respectively been a part of the GB squad for the Games in Taipei (2017) and Naples (2019).

Tsaptsinos said: “The World University Games was a once in a lifetime experience for me. The multi-sport event allowed me to compete against some of the best players in the world in front of thousands of spectators, something an athlete can dream of.

“The atmosphere around the village, around the playing venues and from the crowds could only be described as phenomenal. Every volunteer at the games made it extra special.

“As part of Team GBR, I fondly remember a lot of laughter, happy memories and team spirit.”

Bolton added it was an “amazing experience at the World University Games, I loved every minute of it especially the Opening Ceremony, the atmosphere was incredible.”

To be eligible, athletes must be aged 18 to 26 and a national or citizen of the country they represent. They must be students who are currently working towards a degree or diploma at a recognised university or similar institute, of have graduated in the previous two years.

The normal limit of 25 years old, and graduates from the previous one year have been extended to allow those who were eligible this year to still compete next year.

Table Tennis England’s Aled Howell, who was the Team Leader at the 2019 edition of the Games, is keen to hear from qualifying athletes who are interested in travelling to Chengdu next year.

He said athletes would likely have to fund around £2,500 fees to cover travel, accommodation and other expenses. Previous team members have been able to secure funding from their universities, but this is the responsibility of the athletes. Any athletes who meet the criteria are asked to contact Aled to express their interest, or if they would like further information, as soon as possible.