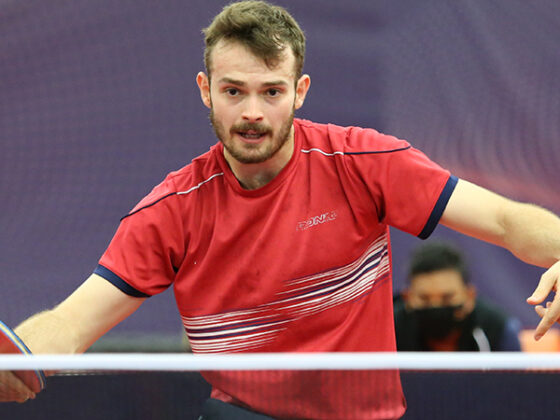 Sam Walker has become the first English player to win a doubles title on the international circuit since the advent of the ITTF World Tour in 1996.

Walker and his Swedish partner Truls Moregard lived up to top seeding at the Czech Open in Olomouc as they defeated French duo Leo de Nodrest & Lilian Bardet in five games.

Having narrowly lost the first, the top seeds took the next two games to move within touching distance of the title – but their opponents hit back to take it to a decider.

Walker & Moregard built a 9-3 lead, and although the French pegged it back to 9-6, Bardet served into the net to present the top seeds with four match points – and they duly converted their second to take the title.

Watch the match below (Men’s Doubles starts at approx 49 minutes).

Walker had become only the third English player to reach a Tour final and, although this event does not have the cachet of the Platinum Qatar Open final which Liam Pitchford & Paul Drinkhall reached in 2020, it is still a piece of English table tennis history for Walker.

The Worksop player said: “Just winning any international open is amazing – I’ve never won anything like that, so it’s really good.

“We played really well in the first match against the Russians (a 3-2 win over Tiutriumov & Ismailov), which was a tough match, a really good doubles match, and it just went from there.

“We had a nice draw in the next round and then the Indian pair in the semi-finals and that was 3-2, and then 3-2 today – for some reason, we’ve been good in the last set.

“It’s nice to play with Truls because he’s relaxed about it and he’s got really good quality, especially on his serve and receive. His character’s good and in the first round we said to just enjoy it – and that’s what we did.”

Moregard went into the event with a lot of confidence, having won the singles title at the WTT Contender Budapest last week, but he was carrying a back injury which meant he had to pull out of the singles semi-finals here earlier today.

Walker said: “He’s had a cramping injury in his back, but thankfully he was nice and played the doubles final even though he wasn’t at full fitness. The way he played, it wasn’t easy to tell and that shows his quality is good.”

Walker is also delighted to get some matches under his belt after a difficult first half of the year and added: “The main reason for not being at the top of my game recently is not having that run of matches.

“I lost in the singles after winning the first two games and feeling comfortable, but the Indian guy (Snehit Suravajjula) played really well and that lack of match sharpness meant I let it slip.

“Getting the matches in the doubles has really helped – they are still matches and it’s good to get those under my belt ready for the season – I start with my new club (Cologne) the weekend after next and am travelling straight to Germany from here.”